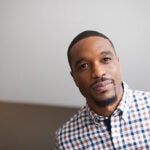 Skillful negotiation can often be more art than science. But it was science that played the most pivotal and visible role in reaching the breakthrough nuclear weapons accord between the United States and Iran last year.

The man credited with giving science the prime seat at the bargaining table in Vienna was U.S. Secretary of Energy Ernest Moniz. A longtime nuclear physicist at Massachusetts Institute of Technology (MIT), he leads the Department of Energy, whose core missions involve ensuring nuclear security and confronting climate change, not just by measuring and detecting it, but by searching for science-based solutions.

Moniz discussed his unusually powerful part in the Iran deal and how science can — and should — be part of diplomatic efforts to solve major global challenges such as nuclear disarmament and climate change Thursday evening at Harvard Kennedy School (HKS).

The “only critique worth discussing,” Moniz said, is why the rollback period is 15 years and not longer. “You can always question ‘why 15 years? Wouldn’t 25 be better?’ Well, yeah.”

But given the threat that a nuclear weapon in Iran would pose to the world and the international community’s determination to make sure that never happens, the deal zeroed in on Iran’s nuclear weapons program, not other issues.

Moniz doesn’t think the deal’s implementation will automatically be derailed by recent developments such as suspicions that Iran shipped illegal rifles and other small arms to Houthi fighters in Yemen that were intercepted by U.S. and French naval forces in recent weeks, or Iran’s apparent escalation of missile launches. But Iran’s ongoing behavior outside the narrow scope of the agreement — such as its role in Syrian fighting, its support for Hezbollah, and human rights violations — could eventually take a toll, he allowed.

“Clearly, if the other issues don’t get better, the concern is that even other sanctions could come on and the relationship could be difficult,” Moniz said during a brief session with reporters before delivering the Robert A. McNamara Lecture on War and Peace. “We’re now three months into implementation; it’s going to take a lot more years before we say we’re home free.”

The talks had reached a standstill in early 2015 when Moniz took a more central role in the negotiations and began working with his Iranian counterpart, Ali Akbar Salehi. The men shared ties to MIT, Moniz as a faculty member and Salehi as an alumnus, and their common scientific background led to a clear understanding of what both sides needed to achieve. That opened the door to possible solutions.

The United States had to have at least a one-year “breakout time,” defined as how long it would take Iran “in a full sprint” to assemble the material to build an initial nuclear weapon. And, at President Barack Obama’s insistence, verification provisions that went on for a substantial period of time, in some cases indefinitely, had to be in place, a demand that’s always difficult to get met, he said. For Iran, the ability to continue the activities and objectives of its peaceful nuclear program was essential.

The unity shown by the “P5+1” nations and the European Union was also a key reason for the deal’s eventual success, Moniz said.

“For the United States to even contemplate unilaterally reversing this agreement would be a tremendous mistake, because in fact the effectiveness of the sanctions regime derived from the coherence of the international community,” he said. “Our deciding to walk away means we walk away alone.”

Moniz hopes that many of the gains to eliminate and secure loose nuclear materials around the world that were achieved through the final Nuclear Security Summit held early this month in Washington, D.C., will live on after the Obama administration. In December, the International Atomic Energy Agency will host the first in a series of ministerial-level summits on the issue, while China, which is in the middle of a massive expansion of its nuclear power capabilities through 2030, has built an “impressive” complex that will train thousands of inspectors from the region.

With the threat of nuclear terrorism still on the rise, Moniz advised the next president to sustain key programs that the United States has underway, such as its work to help other countries establish “centers for excellence” for nuclear security and to continue returning weapons-grade material to the United States and Russia from sites around the world.

Other challenges on the front burner that will need to be addressed in the next administration include more elevated security around nuclear facilities, as well as limiting access to radiological sources at civilian sites such as hospitals and oil operations to prevent access to material for making “dirty” bombs, said Moniz.

North Korea’s recent displays of nuclear firepower are “obviously … a huge threat” to its neighbors, including China, which “should get a little bit nervous,” Moniz told reporters. The United States will need to work closely with both North Korea and Russia to push the former’s denuclearization. “Nobody’s saying it’s going to be a short path.”

Despite the noteworthy goals set in the Paris Agreement on climate change, which calls for 25 to 30 percent reduction in carbon emissions in the next 15 years, Moniz said the United States must be even more ambitious in the coming decade and robustly pursue and support innovations in clean energy.

“The reason is pretty simple: that innovation, to succeed and scale in the marketplace, ultimately it’s going to be continuing to drive down cost, and lower costs will lead to more ambition, especially in the emerging and developing economies,” he said. That effort has already begun, as 20 nations, including the United States, have agreed to step up innovation efforts and work closely with the investment world, led by Microsoft founder Bill Gates.

“I’m certainly a technology optimist, not surprising, but there’s ground for it. Just look at what’s happened in the last six years with costs: solar down 50 percent, wind down 40 percent, batteries down 60 percent, LEDs down 90 percent,” Moniz said. “We’ve got to keep that trajectory going and extend it to other technologies, as well.”