Endowments as engines of education 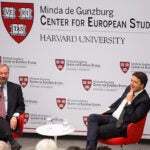 The United States’ global pre-eminence in higher education is based, in part, on a time-honored partnership with the federal government, including an exemption in the tax code that supports teaching and research, officials from Harvard University argued in a letter to two congressional committees on March 31.

This relationship enables Harvard and peer universities across America to make college affordable through generous financial aid programs; to support students and professors; to build laboratories, libraries, museums, and institutes; to contribute jobs and spending to the economy; and to graduate future leaders, the letter said.

“America’s colleges and universities are admired the world over because of longstanding and shared commitment … to educating individuals regardless of their backgrounds, to driving discovery and innovation, and to serving the public,” Harvard President Drew Faust wrote in a cover letter to Sen. Orrin Hatch (R-Utah), chair of the Senate Finance Committee, and U.S. Reps. Kevin Brady (R-Texas) and Peter Roskam (R-Ill.) of the House Ways and Means Committee.

“The federal government is a vital partner in this effort, providing strong federal student aid programs, tax benefits to encourage students to pursue higher education, funding for basic and applied research, and support for charitable organizations, as offered in the tax code,” Faust continued.

Harvard was among 56 private colleges and universities that received inquiries from the two committees in February.

In a 23-page document replete with facts and figures, University officials detailed the endowment’s critical role in supporting activities ranging from instruction and scholarship to financial aid for undergraduates and Ph.D. students.

Harvard’s endowment, they wrote, consists of more than 13,000 individual funds, of which 84 percent (totaling $31 billion) are restricted by the terms of the original donations. Annual investment returns, the officials explained, are employed for two competing purposes: to fund current operations and to maintain the endowment’s inflation-adjusted value over time, enabling it to support Harvard’s mission in perpetuity. Overspending now, they said, would erode the endowment’s future value, crippling its ability to fund coming generations of faculty and students the same level of activities as it does today.

“Harvard reconciles these goals — steady, predictable distributions and maintenance of purchasing power over time — annually in setting the endowment distribution,” Harvard officials wrote in the memo to the congressional committees. “The practice has been to target an annual endowment payout of 5.0-5.5 percent of market value, employing a formula that smooths market returns into the distribution over time to provide predictability of income for budgeting purposes.”

Harvard, they noted, is made up of 13 Schools with more than 21,000 students. With a $4.5 billion annual operating budget, it is one of Massachusetts’ largest employers.

All this, Faust argued, is made possible by Harvard’s endowment, which she called “the University’s largest asset and our largest source of financial support,” funding 35 percent of its operating budget. She also highlighted the endowment’s support for financial aid across the University, including at Harvard College, where one in five families pay nothing toward the cost of tuition, room, and board, and nearly 60 percent of undergraduates pay reduced costs.