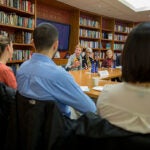 Leaders from developing nations gather at Harvard to talk health

A Harvard program to improve health care delivery around the world is increasing its focus on the leaders and decision-makers who ensure that local health clinics are properly supplied and fully staffed.

Nine finance ministers from developing nations spent four days at Harvard’s Loeb House to discuss the importance of health to a nation’s economic performance and how to design health care systems that are both efficient and effective.

Michael Sinclair, executive director of the Ministerial Leadership in Health Program, said there is often internal tension between health and finance leaders because their aims are at odds — at least on the surface. While health ministers are concerned with implementing programs that reduce disease and save lives, finance ministers want to ensure scarce government funds go where they’re most needed and are often beset by competing priorities from different government agencies.

The program Sinclair leads helps finance ministers understand the common ground they share with health ministers: ensuring health programs are well designed, well executed, and provide the biggest health boost for the buck. Waste reduction is particularly important, he said, because some estimates say as much as 40 percent of health spending is squandered each year through corruption, theft, and inefficiency.

It can be difficult to predict a health system’s burdens from year to year, Sinclair said, because natural disasters and disease outbreaks can upset even the most carefully designed plans.

“The budget drives everything in health. It does in all other sectors, but most particularly in health,” Sinclair said. “We’re trying to align the two.”

The Ministerial Leadership in Health Program, sponsored jointly by the Harvard T.H. Chan School of Public Health and the Harvard Kennedy School, is conducted in a workshop setting that draws on the personal knowledge and experience of participants. This month’s gathering was attended by finance ministers from Sri Lanka, Mozambique, Burkina Faso, Guinea-Bissau, Bhutan, Ethiopia, Gabon, Guyana, and the Bahamas. A similar event for health ministers is scheduled for June.

Ministers were paired with experienced partners — many were former ministers themselves — who facilitated goal-setting and the initial drafting of possible programs to reach those goals. Ministers heard case studies of successful programs in Turkey and Malaysia, as well as the potential effects of specific initiatives, such as universal health coverage, tobacco control, and public-private partnerships.

The event included sessions on leadership — learning from mistakes, priority setting, and budgeting. Rifat Atun, a professor of global health systems at the Harvard Chan School and faculty chair of the program, said that it emphasizes links between economic growth, poverty reduction, and health. One of the program’s strengths, he said, is that it allows ministers to step back from the often frantic day-to-day business of government to get a larger perspective.

“There’s a very good sharing of experience, sharing of perspective,” Atun said. “They’re thinking about action, which is very useful.”

Rosine Coulibaly, Burkina Faso’s minister of economy, finance, and development, has been on the job for only three months. She said the sessions helped her understand the particulars of the health sector and highlighted possible policy tools.

“I think it is very, very useful,” Coulibaly said.

With the Bahamas about to embark on an ambitious health-care expansion, Michael Halkitis, its minister of state for finance, was hoping for insights from his counterparts that might smooth the process.

“It’s been very helpful … to hear the experiences of ministers from other parts of the world,” Halkitis said. “What you learn is that a lot of the problems are common. The bottom line is we’re basically all in the same boat.”