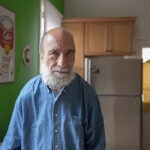 Ask about rhythm and words, and most people think of poetry. Not Thomas Wisniewski, a Ph.D. candidate in comparative literature and a 2016 Harvard Horizons Scholar. For Wisniewski, rhythm plays an equally important role in prose — in how sentences are constructed and how they are read. He believes that artful prose, in its rhythmic beauty, can equal poetry. His research aims to raise our level of understanding of rhythm in the modernist novel and to reintegrate the neglected field of prose metrics into literary studies.

Finding ways to share the work of Graduate School of Arts and Sciences students in the humanities, the social sciences, and the sciences, within Harvard and with the general public, is a key aim of the Harvard Horizons initiative. Each year, eight Ph.D. students are chosen to participate in an intensive mentoring program designed to help them communicate the substance of important academic work to a broad audience. The training culminates in the Harvard Horizons Symposium, where the Horizons Scholars deliver five-minute talks about their work from the stage of Sanders Theatre. The symposium, which is free and open to the public, takes place on Tuesday at 6 p.m.

Wisniewski discussed his work in advance of the symposium.

GSAS: How did you develop an interest in the humanities?

WISNIEWSKI: It’s a lifelong pursuit. I’ve never believed in hobbies, only obsessions — even as a boy. Since childhood I’ve had a fascination for three art forms: literature, music, and dance.

I grew up in a small town in southeastern Michigan in a house with many books, brought home by my mother, a librarian. I studied the saxophone for many years and, to this day, continue to perform as a chamber musician and soloist with a number of ensembles and orchestras in Boston and Buenos Aires. I also teach and perform Argentine tango — both the music and the dance. This spring semester at Harvard I’m teaching a new course, “Argentine Tango: Culture, Music & the Dance,” which is the first of its kind, offered in the College’s newest concentration, Theater, Dance & Media.

My work as a humanist is informed by being both a scholar and practitioner. My longstanding interest in the performing and verbal arts abides through my teaching and scholarship. Scholars of literature work against a dangerous belief that the humanities are of little importance to society. I believe otherwise.

GSAS: What question drives your research?

WISNIEWSKI: How may deepening our understanding of the rhythm of prose change the way that we read literature?

GSAS: What is the purpose of your doctoral research?

WISNIEWSKI: To reintegrate the neglected and interdisciplinary field of prose metrics into literary criticism and to raise the study of rhythm, orality, and language to a new level of understanding. If what is missing in studies of literary style is, as I contend, an analytical emphasis on prose rhythm, then innovations in musical prosody offer new ways of theorizing rhythm in language and music.

GSAS: What sparked your interest in rhythm?

WISNIEWSKI: I’ve internalized it. From years and years of practicing with a metronome!

Everything that I love doing in the world with any kind of regularity involves rhythm: repetition and alternation, pattern and flow. Reading aloud. Writing. Dancing. Skiing. Swimming. Walking. Playing tennis. Making music.

Rhythm is intrinsic to all the arts and fundamental to our understanding of them. What unites all that I do as a scholar of the comparative arts and as a practitioner — a professional musician and dancer — is the study of rhythm.

GSAS: How did modernism change our understanding of prose rhythm?

WISNIEWSKI: Although philosophers and writers from antiquity to the present day have remarked on the significance of rhythm in prose, the study of this subject, often considered a handmaiden to prosody, is a category of analysis and thinking that has all but disappeared from literary studies; except for a brief period in the early 20th century, when the field received considerable attention in Europe and North America, research about prose rhythm has been largely ignored by the academy and often glossed over in literary studies — a neglect due, in part, to the field’s obscure terminology.

That the most productive period of scholarly research on rhythm in prose corresponds with the rise of High Modernism is neither coincidental nor circumstantial. In no other period do writers explore the limits and extremes of rhythm as do the modernists — those master stylists of the early 20th century who perfected the art of prose rhythm in narrative. The measured use of rhythm by writers including Nabokov, Joyce, Hemingway, Conrad, Woolf, Beckett, Proust, Pirandello, and Borges demands special attention. Not the prosaic, but the prose poetical: Theirs is a prose that avails itself of the rhetorical effects of poetry; prose that aims to escape from voicelessness; prose that strives to recover a lost, and even create a secondary, orality; prose that aspires, as in the modernist novel, toward music.

GSAS: How can studying the rhythm of prose help us to be better writers and to understand what makes a work of literature great?

WISNIEWSKI: Studying prose rhythm teaches us that style is not secondary to meaning; that mastery of grammar is not mastery of style; that good prose is always aware of its internal rhythms; and that a recovery of the terms of classical rhetoric is useful for analyzing rhythm in prose.

Great works of literature are written by brilliant stylists with remarkable ears for the expressive range and power of language. Tuning our own ears to understand and appreciate their achievements teaches us to be better listeners, readers, writers, scholars, and teachers. Heightening our sensitivity to rhythm in literature enhances our understanding of rhythm in the world.