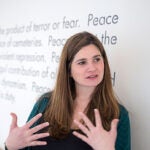 Laurence Ralph, a Radcliffe Institute for Advanced Study Fellow, has been studying the issue of police violence in Chicago from the perspective of its survivors and community organizers. Drawing on his research, he says there is a need to think critically about the state and practices of policing.

A scathing report released yesterday by a task force appointed by Mayor Rahm Emanuel said that the Chicago Police have “no regard for minority lives.”

The Gazette sat down with Ralph, the John L. Loeb Associate Professor of the Social Sciences in the Departments of Anthropology and African and African American Studies, to talk about his research, the limits of the American legal system in addressing issues surrounding police violence, and the current climate on the matter.

GAZETTE: You’ve been doing research on police violence in Chicago for the past decade, and the topic is very relevant today. What can your research tell us about the issue of police brutality against unarmed black men?

RALPH: The national debate about police violence in America stems from the growing collective awareness that police officers are contributing to an alarming number of violent deaths. My research shows that instead of assuming that lethal force was either necessary or the momentary overreach of a rogue cop, instead of assuming that these cruel events are accidents, many Americans now question whether lethal force is a fundamental aspect of modern-day policing.

GAZETTE: Part of your research has focused on the actions by Chicago activists to air issues of police violence before international bodies. Could you tell us more about this?

RALPH: I’ve been looking at activist organizations in Chicago that have gone to the United Nations in Geneva to try to make police violence a human rights issue and to get accountability. I’m also looking at the case for reparations for victims of reported police torture in Chicago. I’ve been studying the history in Chicago. The first case is from 1984, but since then more and more victims have come out. The city of Chicago has already paid over $200 million on legal fees and settlements to victims, and recently some of the victims have been awarded $5.5 million in reparations. There is an increasing effort to make the public aware of this problem, but also to find creative ways of addressing it. The international arena is one example.

GAZETTE: Can you tell us more about this? Is there a precedent for U.S. groups taking their grievances to the international arena?

RALPH: There is a group in Chicago called We Charge Genocide that went to the UN in 2014. They get their name from a petition of African-Americans, W.E.B. Du Bois, Paul Robeson, among others, who went to the UN in 1951 to address the issue of systematic racism against African-Americans. The Chicago group takes its inspiration from this prior group and is making some of the same arguments. They’re trying to follow a historical precedent. They’re saying that although we had the Civil Rights movement in the United States, there are still big hurdles to overcome, particularly when it comes to race and legal justice.

GAZETTE: What happened with the first group? What do you think is going to happen with the efforts of the Chicago group to find justice?

RALPH: Back in 1951, people in the United States were afraid of the threat of communism. People were afraid that African-Americans would be more sympathetic to communism and subvert the United States from inside. There was a lot of effort not to talk about the first trip to the UN, but black newspapers talked about it. In the Chicago case, the goal is not merely to get particular sanctions on the Chicago Police Department, but also to give victims of police violence an outlet to express their grievances.

GAZETTE: For these activists, what does the international stage offer that the American legal system may lack?

RALPH: International laws give people a different language to talk about systematic racism and the fact that African-Americans are disproportionately impacted by police violence. Often within the U.S. legal system, police violence cases are looked at individually, and everything else is irrelevant. There is no way to talk about the fact that a particular racial group is overwhelmingly being impacted by police violence. So the international stage gives you another set of terms and allows for a broader set of arguments to be made. I think that beyond sanctions, the language is important, and also, since this latest group went to the UN, a lot of other incidents of police violence have happened in Chicago. Their efforts have helped the public mobilize around the issue. The activism that took place last year wouldn’t have been that effective if they hadn’t gone to the UN.

GAZETTE: What do activists in Chicago think about the American legal system?

RALPH: The group I’m researching is frustrated in the sense that, oftentimes in the American legal system, racial factors are excluded. You can’t talk about race; you can’t talk about social position. And oftentimes, the police are given the benefit of the doubt and they’re more trusted in court than the victims of police violence. But the international organizations can look at patterns of police abuse, and they take into consideration the rights and the word of citizens first, when filing a petition. While in the U.S. this could be an open-and-shut case, that’s the starting point for the international bodies.

GAZETTE: How would you describe the police violence situation in Chicago compared with other American cities?

RALPH: Part of the problem is that we don’t actually know the scope of police violence. We can’t make an assessment about which cities are better or worse in terms of police violence because a lot of what we need to keep track of, we haven’t been keeping track of on a large-scale level. What I’m focusing on is the culture of policing. I ask: What gives people an incentive to enact violence when they don’t necessarily need to? What kind of incentives are there to rise up the ranks within the police department? And why do some police officers keep silent when they know that misconduct is taking place? I hope that these cultural factors will be relevant to other police departments in other cities across the United States.

GAZETTE: What were the findings of your research in Chicago?

RALPH: I wanted to examine the contradiction between the fact that the police are supposed to safeguard citizens and yet they’re contributing to an alarming number of violent deaths. I’m focusing on the factors that keep police misconduct hidden. Much of my work looks at the phenomenon of police torture, specifically. I’m interested in criminal suspects who have been brutalized or tortured in order to coerce confessions, and what keeps these methods under wraps. I find that, although many officers might know or suspect misconduct, they don’t want to tell anyone because it could compromise them or put them in a position to risk their careers. Some develop strategies to avoid getting knowledge. The larger issue is how the police departments operate in America today.

GAZETTE: Would you say that there is a climate of looking the other way in most police departments when it comes to issues of misconduct?

RALPH: In the cases I have studied, there is a climate of looking the other way, definitely. There is a lot of pressure to both get arrests and confessions. And there are disincentives for outing police officers.

GAZETTE: What do you hope to see happen with grievances of police violence?

RALPH: My hope is that more creative solutions can be imagined to solve the problem. I don’t know what those solutions will be yet. But what I’m seeing in the research is that the same solutions are being imagined as a way to solve the problem. Some examples are: another report, another committee created to address the problem, and more personnel being fired. But if we look at this from a long, historical perspective, we see that those changes don’t affect what’s actually going on. My hope is that we find another way to think about what can be done, and that’s the importance of going to the UN. Not to say that’s the answer, but it gives people a space to air grievances, an alternative vision of the law than what we currently have in the United States.

Ralph, a Joy Foundation Fellow at the Institute this year, will present  “Witnessing Death: Policing, Race, and the Limits of Democracy in the 21st Century” on Wednesday at 4 p.m. at the Sheerr Room, Fay House, 10 Garden St., Cambridge.