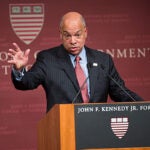 At West Point, Faust emphasizes importance of the liberal arts in effective leadership

There is an ineffable quality of leadership, one that goes beyond mere job training, that encompasses what came before and anticipates what’s ahead, and, most importantly, that inspires others to follow.

Speaking at the U.S. Military Academy, Harvard President Drew Faust told an audience of about 800 West Point cadets and faculty members Thursday that an understanding of humanity — including what inspires people to action — is at the heart of leadership.

That understanding, Faust said, is best developed through a broad-based liberal arts education, one that encompasses the humanities and provides the tools that help to make strong leaders. As students learn the humanities, they come to understand the wisdom of past decision-makers, the intellectual flexibility that underlies making the right choices, and the language that inspires others toward progress.

“Such inquiry teaches us how to scrutinize the thing at hand, even in the thick dust of danger or drama or disorienting strangeness,” Faust said. “It imparts skills that slow us down — the habit of deliberation, the critical eye, skills that give us capacity to interpret and judge human problems; the concentration that yields meaning in a world that is noisy with information, confusion, and change.”

At a time when broad education in the humanities is under assault — bachelors’ degrees in the field are at their lowest level since reliable records began in 1948 — it is telling, Faust said, that West Point and the other military academies still emphasize the liberal arts. Their importance is reflected in the facts that 55 percent of world leaders hold humanities or social science degrees and 75 percent of business leaders say that most important workplace skills involve the humanities: “the ability to analyze, communicate, and write.”

Faust spent the day at West Point, meeting with faculty members and eating lunch among the academy’s 4,440 cadets, including the eight juniors and seniors at her table, who shared insight into their academic studies and their plans for the future. She participated in an afternoon symposium with English Professor Elizabeth Samet, who graduated from Harvard College in 1991, and delivered the annual Zengerle Family Lecture in the academy’s Robinson Auditorium.

Introducing the Zengerle lecture and Faust as its inaugural speaker, Col. David Harper, academy professor and head of the Department of English and Philosophy, praised her as a longtime advocate of active duty and veteran students, saying,  “President Faust was instrumental in reinstating Navy and Army ROTC programs at Harvard.”

In her speech called “To be a Speaker of Words and a Doer of Deeds: Literature and Leadership,” Faust mentioned a personal connection to West Point. Her great-grandfather Lawrence Davis Tyson graduated in 1883, near the bottom of his class. Despite that inauspicious beginning, he had a long and distinguished career, serving as an officer in the Spanish-American War and as a general in World War I before being elected to the U.S. Senate, where he died in office.

Great leaders, Faust said, understand the importance of language, of the “interpretive and empathetic power of words.” In addition to Patton, she quoted Frederick Douglass, Abraham Lincoln, and Winston Churchill, whose words were not just means of communication, but tools of leadership and, sometimes, weapons of war.

“The distance between this platform and the slave plantation, from which I escaped, is considerable,” Douglass said during a Fourth of July speech prior to the Civil War, which ended slavery. “What to the American slave is your Fourth of July? I answer: a day that reveals to him, more than all other days in the year, the gross injustice and cruelty to which he is the constant victim.”

Faust said that the humanities offer three qualities of value to leaders: perspective, improvisation, and persuasion.

Quoting West Point’s own system for leadership development, Faust said perspective is “the ability to know oneself and to view the world through multiple lenses.” Anthropology, for example, can bring perspective to the Sunni-Shia Muslim split, while literature can help to provide understanding about the “seductiveness of war,” and history can offer insights into ourselves and into those around us.

Faust, a historian herself, said that improvisation is a critical ability that goes beyond the skills that may be important in training for a particular job. In battle, she said, soldiers understand the need to be flexible, to react creatively to changing circumstances, even amid chaos.

“This lies at the heart of why we pursue the breadth of the liberal arts,” Faust said. “Where there is no rulebook, turn to philosophy, to history, to anthropology, to poetry, and to literature. Take the wisdom and inspiration of the great thinkers and leaders who went before you, and then create your own.”

Language and persuasion are critical skills for a leader, Faust said. The world’s most memorable leaders had that one characteristic of leadership that everyone agrees on: the ability to get people to do what they otherwise might not. Faust said that skill with the written word works both in communicating and in understanding, since writing things down can help someone reason through knotty problems.

“The power of language is undeniable and irresistible,” Faust said. “In no small part, changes that fundamentally shape the world we live in today resulted from leaders for whom language itself was a form of action.”

In the end, Faust said, the world needs more leaders like those educated at West Point. The military, she said, is one of the last institutions in the country in which the public still has faith.