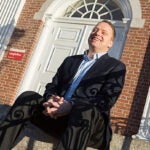 ‘Average’ gets his ire up

Harvard Business School (HBS) and BBC Radio 4 have worked together to produce the first episode of “The Global Philosopher,” a program hosted by Harvard political philosopher Michael J. Sandel.

The program utilizes the innovative HBX Live studio to link people from around the world to discuss the philosophical principles underlying controversial concerns of the age. HBX Live is part of Harvard Business School’s digital learning initiative, HBX.

“This is an exciting opportunity to create a truly global public square,” said Sandel. “The HBX Live platform enables us to conduct video-linked discussions across national and cultural boundaries. It is a chance to think together, and to learn from one another, about the hardest ethical questions we face as citizens.”

HBX Live is a video-anchored virtual classroom designed to reproduce the intimacy and synchronous interaction of HBS’ famed interactive case study method in a digital environment. No matter where participants are located, they can log in concurrently and join real-time sessions.

In the custom-designed HBX Live studio, a high-resolution video wall mimics the amphitheater-style seating of an HBS classroom, with up to 60 participants who are able to actively engage in the discussion projected on individual screens. Additionally, hundreds of people can observe the session via a live stream and participate in the conversation via chats and polls. Sessions are expertly produced using still and roaming cameras, creating the look and feel of being in a real classroom, where the participants can see both the discussion leader and fellow other participants. The HBX Live studio is located in the Boston-based facility of public broadcaster WGBH. 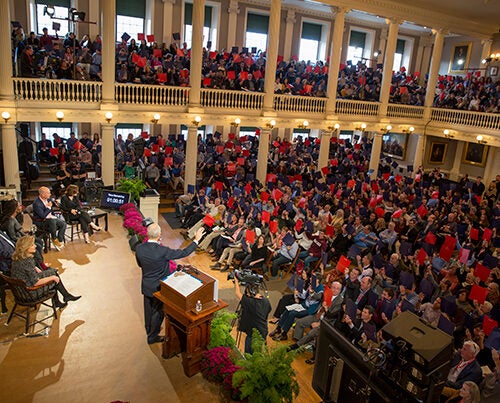 Opening HUBweek, Michael Sandel mulls the sometime tension between our technology and ourselves

In the first session, Sandel led a debate on the topic of immigration and the moral significance of national borders. Radio 4 selected participants through a process that began by collecting a database of 300 people from more than 65 countries, from which 60 individuals were invited to be on the interactive wall. These engaged citizens had demonstrated an interest in playing an active role in debates that affect the world. The remaining candidates were invited to observe a live stream of the session, to which they contributed to the discussion via polls and chats.

“From its inception, we knew HBX Live would represent a unique opportunity to gather audiences from around the world for conversation and engagement,” said HBS Professor Bharat Anand, faculty chair of HBX. “Working with Michael and BBC Radio 4 allows us to connect in a meaningful way with their audience around the globe — people who are eager to learn about the key problems of the day and contribute their insights and points of view.”

The video of the first session is available to view on the Radio 4 website.