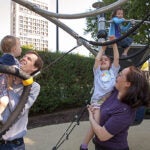 Opening HUBweek, Michael Sandel mulls the sometime tension between our technology and ourselves

Innovation. Disruption. Datafication. In some ways, we are now living in a brave new world of technology and change once only imagined by writers like H.G. Wells and Isaac Asimov. But in this time of unprecedented scientific transformation, have we thoughtfully considered the moral and civic implications of what’s ahead, or are we instead on a dark path like that of which George Orwell dreamed?

In a public debate Sunday evening, Harvard political philosopher Michael Sandel, the Anne T. and Robert M. Bass Professor of Government in the Faculty of Arts and Sciences, asked a sold-out crowd in Boston’s Faneuil Hall to consider and confront some fundamental queries: What is the role, if any, of accident, happenstance, and imperfection in this era of smart machines, genetic engineering, and big data? And what do we lose when we prefer the concept of “made by machines” to “knit by humans”?

The dialogue was an opening event of HUBweek, an inaugural collaboration among Harvard University, Massachusetts Institute of Technology, The Boston Globe, and Massachusetts General Hospital that is designed to showcase and tap into the myriad innovations and ideas in this region’s scientific, artistic, and technology communities. The festival — think a nerdier South by Southwest, but with fewer tattoos — will feature 100 civic and cultural events across Boston and Cambridge and runs through Oct. 10.

Predictions of inclement weather had prompted the event, initially dubbed “The Fenway Forum,” to relocate from John Updike’s “lyric little bandbox” to that “cradle of liberty” across town, Boston’s historic Faneuil Hall.

Serving at times as both master of ceremonies and referee, Sandel posed a series of provocative questions about technology and ethics to a star-studded panel from the realms of art, science, and politics, including cellist Yo-Yo Ma ’76; Arianna Huffington, editor in chief and namesake of the Huffington Post; former Harvard Lampoon president Alexis Wilkinson ’15, now a writer for HBO’s Emmy Award-winning political comedy “Veep”; Andrew McAfee, D.B.A. ’99, principal research scientist at MIT, author, and co-founder of the MIT Initiative on the Digital Economy; and Sherry Turkle ’69, Ph.D. ’76, the Abby Rockefeller Mauze Professor of the Social Studies of Science and Technology at MIT. Comedian and Harvard alumnus Conan O’Brien ’85, as well as Pedro Martinez, the Hall of Fame pitcher for the Boston Red Sox, also weighed in, with humor and eloquence, during several recorded video segments.

Long known at Harvard for his wildly popular course “Justice,” Sandel travels the world delivering his evocative philosophical dialogues about justice, ethics, and democracy, whether online, on television or radio, or to audiences at Great Britain’s Houses of Parliament and the Sydney Opera House in Australia, among other places.

Sandel asked the audience to register its approval or disapproval, using red and blue cardboard placards, to a host of questions he also put to the panel, such as: Is the use of gene editing to improve human traits ethical, or should it be limited to eliminating disease or repairing other health conditions? 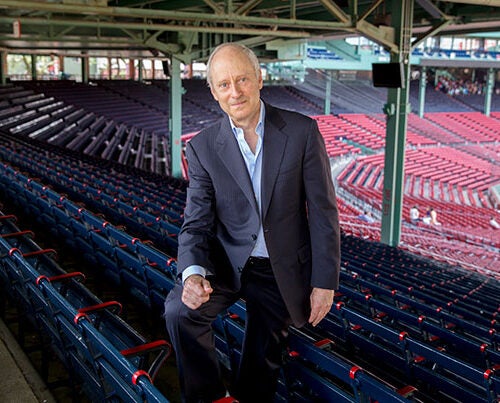 As one of four founders, University organizes 18 presentations

He asked the panel and audience to consider issues prompted by new innovations, such as: Do algorithm-driven apps such as Uber have a duty to provide privacy to users? Could a Netflix-like dating app be a more reliable predictor of the ideal mate than one’s parents or friends? And should insurance companies be allowed to raise or lower the price of health insurance based on data culled from someone’s Fitbit?

“It’s clear that we begin with these eye-catching technologies and acts. But the debates we have really are not about the technology in the end; they’re ultimately about us, about how we should understand and negotiate our relations with one another and with the world we inhabit,” Sandel said.

A “tension” surrounding our desire to do well in school or be better at our jobs can lead to overvaluing technology that offers shortcuts and convenience, but at the price of kismet, wonder, and reverence, he said.

Michael Sandel leads an all-star panel of authors, artists, entertainers, and other well-known public figures in a lively discussion—with audience participation—about some hard ethical questions and the meaning of citizenship today.

“We aspire to mastery and control, to try to extend our ability to control our lives and events as fully as we possibly can. And yet, there are moments when we notice that the project of mastery and dominion over nature and our children and our families and ourselves comes up short.

“In an age of apps and genetic engineering and smart machines, could it be that our drive to mastery, sometimes, at least, begins to eclipse or to displace our capacity for wonder, for beholding the world rather than simply aspiring to mold the world? Perhaps our humanity today, given our vast technological powers … requires we at least sometimes rein in that impulse to mastery and control so as to protect and nurture our capacity to behold the world, to take it in.”

Ultimately, how humans best use machines is an essential moral question that warrants robust civic debate, Sandel said, before the incremental creep of invention overtakes us.

“Science and technology can do wondrous things, but one of the things they can’t do is tell us how they should be used. That is up to us; that is our responsibility as human beings and as democratic citizens.”

A few members of Yo-Yo Ma’s Silk Road Ensemble provided a musical opening to the session.