The fears of American Muslims 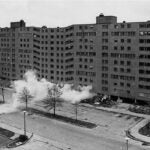 American Muslims and others concerned about intolerance face a daunting challenge countering the growing negative sentiments toward Islam in the country, according to a roundtable at Harvard on Monday.

With attitudes toward Islam a focus of contention in the highly charged national political season, speakers highlighted how hostility toward the religion has spread and what effects it is having on young Muslims trying to find their way in American society. The rising anti-Muslim sentiment reflects a “deep polarization” between some Muslims and non-Muslims, one that is rooted in religious illiteracy, said Ali Asani, who moderated the discussion and is professor of Indo-Muslim and Islamic religion and cultures, as well as director of Harvard’s Prince Alwaleed Bin Talal Islamic Studies Program.

“This religious illiteracy has created a breeding ground for fear, prejudice, and hatred that have been exploited for political gain by unscrupulous politicians and terrorist organizations both in Western and Muslim countries,” Asani said. “It threatens not only democratic processes within countries but also relationships between nations and people.”

Asani said afterward that hostility to Islam “is not just about religion — it’s another manifestation of racism, because racism and religion become conflated.”

The discussion at the Barker Center was presented by the Alwaleed Program, the Harvard Foundation, the Harvard College Office of Student Life, and the Harvard Islamic Society.

Christopher Bail, Ph.D. ’11, an assistant professor of sociology at Duke University who studies how groups shape public discourse, discussed the findings of his recent book on how anti-Muslim sentiment became widespread in American society after the September 2001 terrorist attacks.

“This was the result of a very well-coordinated effort by a small network of anti-Muslim organizations that have succeeded not only in captivating the mass media but also increasingly influencing our counterterrorism policy,” he said.

Using data to track references to Islam in newspapers, television broadcasts, and social media, Bail documented how the groups obtained extensive media attention for their narrative that “Muslims are secretly a fifth column that is trying to subvert the U.S. Constitution under the guise of political correctness.”

“This is a pretty straightforward story about the media playing on people’s fears, gravitating towards the most emotional voices in the aftermath of … a major tragedy,” he said, adding that that “emotional energy creates a really interesting ripple effect within the public sphere.”

In particular, he focused on how young Muslims were affected by the New York City Police Department’s surveillance of Muslim students and faculty on college campuses in the Northeast. The surveillance was part of a larger program the city has since publicly disbanded, but Asani later said students remain fearful that it continues today.

Ali said that for the Muslim students with whom he worked, the surveillance fostered a sense of “hypervisibility, of always being watched,” causing them to constrain their academic and extracurricular activities.

“What we heard from students is that they are self-censoring” their political participation to avoid suspicion, he said. “They have been told by campus chaplains, parents, and community leaders not to engage politically.”

Similarly, he said, “So many of the students I work with think hard about taking Middle Eastern studies classes, or classes that deal with Islamic theology.”

Lana Idris ’16, a former president of the Harvard Islamic Society, said that what is “scary about anti-Muslim sentiment is that it’s not something that’s new.”

“It’s existed for a very long time,” she said, “and like anti-blackness, it’s just becoming very highly visible now because we have social media and we have politicians banking on that right now. … I think it’s just important to know how we should engage when it isn’t at such a hypervisible level.”

Omar Khoshafa ’16, who has worked as a Muslim youth organizer in greater Boston, said that the pressures Muslims face today are prompting many “to see the struggles of others who came before us, like our fellow African-American brothers and sisters, and … to work at the grassroots together.”

He noted that he helped to organize and took part in a Martin Luther King Jr. Day march against police brutality and that an end to Islamophobia was included in the demands of the march.

“People saw it as an intertwined cause in the struggle,” he said.