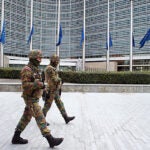 How can you defend a foreigner who came to the United States with the likely intent of causing harm to Americans? For attorney James B. Donovan, a 1940 graduate of Harvard Law School, the real question at the height of the Cold War was: How can you not?

In representing accused Soviet spy Rudolf Abel in the late 1950s, Donovan “probably had the most unpopular client since John Adams defended the British troops in the Boston Massacre of 1770,” as newscaster David Brinkley put it. Donovan was no fan of communism, but he felt it was his patriotic duty to give Abel a strong defense and thereby demonstrate the fairness and integrity of the U.S. legal system. “If the free world is not faithful to its own moral code,” Donovan said, “there remains no society for which others may hunger.” He refused to give up even when Abel was convicted in federal court in Brooklyn. Donovan not only argued down the spy’s sentence from death to 30 years, he appealed the conviction all the way to the Supreme Court, losing narrowly.

In 1962, with the backing of President John F. Kennedy ’40, Donovan traveled to East Berlin to negotiate a swap: Abel for American spy plane pilot Francis Gary Powers, imprisoned in the USSR.

At Harvard Law School in the late 1930s, Donovan lived in Walter Hastings Hall, served as chair of the Law School yearbook, and studied under later Supreme Court Justice Felix Frankfurter. As an alumnus, he donated his legal fee from the Abel case to Harvard and two other universities.

On Wednesday, the Law School’s Program on Negotiation will present a screening of Steven Spielberg’s “Bridge of Spies,” a film about the Abel-Powers negotiations in which Tom Hanks plays Donovan. Afterward, Dean Martha Minow will discuss the film with Professor Michael Wheeler of the Business School; Donovan’s granddaughter Beth Amorosi, president of AMO Communications LLC; and Donovan’s grandson John Amorosi, partner in the law firm of Davis Polk & Wardwell.

Beth Amorosi spoke with the Gazette by phone earlier this month.

GAZETTE: The trailer for “Bridge of Spies” gives the impression that your grandfather was simply an insurance attorney who somehow ended up defending an accused Russian spy. But the film reveals, at least in passing, that he had relevant experience.

AMOROSI: The film does downplay his credentials, or enhances his everyman identity, playing up the fact that he was an insurance lawyer, [seemingly] picked out of the blue. But in reality, he did have quite a rich experience. In World War II, he worked as assistant general counsel for the Office of Scientific Research and Development [the federal agency that developed the atomic bomb], and then as general counsel for the Office of Strategic Services [the forerunner of the CIA]. And after the war, he was assistant prosecutor at the Nuremberg war crimes trial. It was no accident that the Brooklyn Bar Association chose him to represent Rudolf Abel.

GAZETTE: The movie also portrays his relationship with his CIA handler [in the Berlin swap] as somewhat antagonistic. Was that for dramatic effect?

AMOROSI: That was some artistic license. He actually had a very good relationship with the CIA agent he worked with, M.C. Miskovsky. The actor didn’t play one specific person, but more an amalgam of personalities at the CIA.

GAZETTE: Donovan defended a Russian agent during the Red Scare. Was that tough on your mother and her siblings, and on your grandmother, as depicted in “Bridge of Spies”?

AMOROSI: Yes. I think that the times in general then were very tense — as they are right now, when we’re facing terrorism rather than communism. Back then, though, we didn’t see everything happening through the media; there wasn’t the same transparency. So it was almost more a perceived threat, psychological warfare. Not that the threat wasn’t real, but nobody really knew what was going on behind the Iron Curtain. In a way, it is difficult to convey the level of tension my family felt. The film took some license, [inventing a] shooting scene. My family actually lived in an apartment building, not a house, at that time. They were on the 14th or 15th floor, so it’d be impossible to shoot up into their apartment. But that was a good way to convey that tension. And there is a suggestion that perhaps someone shot at the building, and bricks were thrown. There were picketers outside every day when the kids were going to school. The kids were not necessarily bullied, but the family in general experienced some condescending and strange looks from strangers — but also from friends of theirs, which was even more painful. 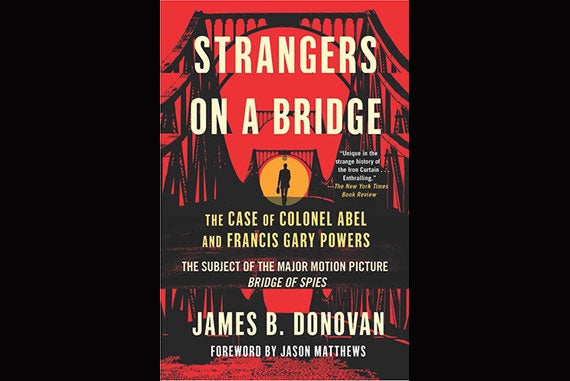 GAZETTE: Did that sentiment turn around after Donovan got an American pilot freed from Soviet prison?

AMOROSI: I think the environment was still tense. A lot of people didn’t understand why Francis Gary Powers was freed; some people were still suspicious of him. In hindsight, I’ve heard members of my grandparents’ generation say, “Your grandfather was a great American.” The passage of time, the distance of time from the actual incidents has really lent itself to the image of my grandfather as a hero.

GAZETTE: Tom Hanks portrays your grandfather as an eminently good guy, tough when he needed to be. Was that accurate?

AMOROSI: Yes, absolutely. He was a very amiable person, very humorous, and very humble, in that he wasn’t above working with anybody at any level to get the job done.

GAZETTE: And six months after the spy swap in Berlin, your grandfather was in Cuba, snorkeling with Castro, trying to pull off an even bigger exchange. Can you talk about that?

AMOROSI: President Kennedy and [Attorney General] Bobby Kennedy had him represent, not officially the U.S., but the Cuban Families Committee, to go and negotiate for the release of the Bay of Pigs prisoners. Between Christmas 1962 and April 1963, he met with Castro 15 times, negotiating the release of 1,113 prisoners — and he obtained exit visas for their families, so ultimately he freed about 10,000 people.

GAZETTE: What made him such a good negotiator?

AMOROSI: Again, he was personable, he liked people very much, he liked building relationships with people of all different cultures and backgrounds. That was one way he could build a strong foundation, because he looked at people as individuals and not as enemies or ideologies. He got to know them on a personal level. So that’s one quality, his humanity. Also, he used reason above emotion and would not bring his personal opinion into any situation, which enabled a much more level playing field. He also loved the law and would adhere to the law while negotiating. And his competitiveness — he loved challenges. … Just getting 1,100 prisoners out was not enough; he wanted to help their families too.

GAZETTE: What about the lessons for young people in James Donovan’s story? You’ve mentioned hoping to make DVDs of the film available to public schools.

AMOROSI: I’d like him to be considered a role model. Healthy role models are vital to our society, and there’s a dearth of them at the moment. Kids are bombarded through the media with all these different possible role models, or people who are automatically assumed to be role models for all the wrong reasons. What I’d like them to learn is that just because someone has a talent as an athlete or a musician — or a lawyer, for that matter — doesn’t automatically make that person a role model. It’s more about their character, their ethics, how they’ve lived their life, how they treat people. And I think to pursue any career of your choice with the utmost vigor and enthusiasm opens up so many doors for you, to become whatever you want to be.

And I hope they learn not to back down in the face of [others’ opinions]. Popularity is overrated. … I don’t want to get into politics, but for example, just because most people are backing some candidate doesn’t make that the right choice. Don’t go with the easy choice; base your decision on your own conscience and your own character and your own beliefs and on what’s best for you — and what’s best for most.

This interview has been edited for length.

The “Bridge of Spies” screening is at 6:30 p.m. on March 30 at Austin Hall, with discussion to follow. View the event listing on the Harvard Law School website.