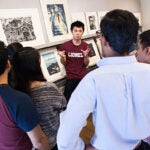 Toni Morrison knew the power of words decades before her own changed the face of American literature.

In her first Charles Eliot Norton Lecture Wednesday before a rapt audience at Sanders Theatre, the Nobel Prize winner and distinguished novelist set a powerful tone on the themes of belonging and “others,” beginning with an early memory of a visit from her great-grandmother Millicent MacTeer, a “tall, straight-backed” matriarch with “tar black” skin, who thought less of Morrison and her sister’s lighter brown complexion.

“Your children have been tampered with,” Morrison recalled MacTeer telling her mother.

That idea of separating identities has been a cornerstone of Morrison’s writing career (“The Bluest Eye,” “Beloved”), but on Wednesday she went deeper, examining literary text (“Uncle Tom’s Cabin”) side by side with a slave owner’s diary and a journal of scientific racism. The Mahindra Humanities Center is hosting the Norton talks, titled “The Literature of Belonging: The Origin of Others.” Director Homi K. Bhabha, who is also the Anne F. Rothenberg Professor of the Humanities, welcomed Morrison with gravitas.

“Never before have I felt the profound need for her presence as today,” he said, pointing to election rhetoric, immigration impasse, and police killings of young African-Americans. “I take comfort from the fact that it is this very darkness — of racism, inequality, violence, totalitarian power — to which Toni Morrison has, for so many years, brought light and life and understanding.”

The 85-year-old, who this week was awarded the PEN/Saul Bellow Award for Lifetime Achievement, enjoyed a sustained standing ovation before beginning to lecture. Speaking from a wheelchair, she described her return to Harvard as “comforting,” then launched into the human tendency “to separate and judge those not in our pact.”

She took aim at Samuel Cartwright, a doctor who, in the early half of the 1800s, invented “drapetomania” as a disorder of slaves who desired to flee servitude. This desire for power and control, which found its way into the New Orleans Medical and Surgical Journal, illustrated the need “to identify an outsider in order to define oneself,” Morrison said.

But her contrast of Thomas Thistlewood’s diary with Harriet Beecher Stowe’s “Uncle Tom’s Cabin” was most dramatic. In the upper-class English slave owner’s personal writings, she read straightforward records of his daily life. There were purchases of sugar and there were weather reports recanted with the same directness as his sexual relations with slaves.

Translating Thistlewood’s Latin text, Morrison read: “Sup. lect. for on the bed, sup terr. for on the ground, in silva for in the woods … not satisfied, sed non bene.”

Even more astonishing, Morrison argued, was the meal where Uncle Tom and Aunt Chloe watched as Master George tossed food toward Mose and Pete.

“For Stowe, slavery is sexually and romantically sanitized and perfumed,” she contended. “Food is thrown on the floor, on a dirt floor for their children to scramble for. It’s an odd scene designed, I think, to amuse and reassure the reader that everything in this atmosphere is safe.”

Stowe’s work provided the title of this first lecture, “Romancing Slavery,” but Morrison, the 58th scholar named to the Charles Eliot Norton Professorship of Poetry, ended by teasing themes from the novel she is currently working on.

“How does one move from a non-racial womb to the womb of racism?”

Morrison’s remaining Charles Eliot Norton lectures are: “Being and Becoming the Stranger” (March 8), “The Color Fetish” (March 9), “Configurations of Blackness” (March 22), “Narrating the Other” (April 11), and “The Foreigner’s Home” (April 16). Starting always at 4 p.m., the lectures are free, but require a ticket. Tickets are available at noon the day of the lecture at Sanders Theatre, 45 Quincy St. (or online with a processing fee).