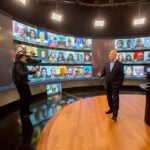 On the morning it overthrew Chilean Socialist President Salvador Allende, the right-wing military junta behind the bloody coup rounded up thousands of citizens, inaugurating 17 years of harsh dictatorship in the South American country.

Among the detainees was Raúl Zurita, a 23-year-old engineering student turned poet who was carrying poems that officers deemed suspicious. He was arrested and taken to a naval training ship with hundreds of other detainees, and there he was beaten and tortured.

Zurita was released after 21 days, but the incident left a profound mark on him. Now, as one of the most celebrated poetic voices in Latin America, he still has trouble making sense of the violence inflicted by the brutal military rule that gripped his country between 1973 and 1990.

“It was horrible,” said Zurita of his arrest, on a recent morning at a coffee shop near Harvard Square. “It was a glimpse of hell that I could never try to describe with words.”

But try he has.

Six years after his arrest, Zurita published “Purgatory,” a collection that renowned poet C.D. Wright hailed as groundbreaking for its use of Christian symbols, brain scans, and graphics to register the violence perpetrated against Chileans. She compared it to Gertrude Stein’s “Lifting Belly” and Allen Ginsberg’s “Howl.”

Later, Zurita wrote “Anteparadise” and “The New Life,” which with “Purgatory” constitute a trilogy that draws on Dante’s “The Divine Comedy,” one of Zurita’s biggest influences. Critics praised the sequence as a major achievement. In 1984 Zurita was awarded a Guggenheim Fellowship and in 2000 he received Chile’s National Literature Prize.

Zurita, the Robert F. Kennedy Visiting Professor in Latin American Studies, has bent poetic conventions in an attempt to portray Chile’s spiritual and mental breakdown under the military rule.

“Everything was broken,” he said. “I felt that the traditional language of poetry couldn’t explain what was going on; the wounds that were being created, the pain and desperation. I didn’t want to do a pamphlet, an openly political manifest. We needed more. We had to learn to speak again.”

Zurita will deliver a bilingual poetry reading with Anna Deeny, the translator of his forthcoming book “Sky Below: Selected Poems,” at 6 p.m. Wednesday at CGIS South S-010 (Tsai Auditorium). The event is sponsored by the David Rockefeller Center for Latin American Studies.

Compared to fellow Chilean poets Pablo Neruda and Nicanor Parra, Zurita has distinguished himself for his radical use of language and his experimental endeavors. During the military regime, he joined an art collective that staged performances to protest repression and took part in the social movement that helped put an end to Chilean dictator Augusto Pinochet’s rule in 1990. He had his poem “The New Life” —

— written by small airplanes over the New York skyline and his phrase “Neither Pain Nor Fear” etched with bulldozers in Chile’s Atacama Desert. Zurita said he saw both the sky and the desert as blank pages on which to write a sort of testimony of people’s passage on earth.

With more than 20 collections behind him, Zurita continues to write and live a peripatetic life despite his Parkinson’s disease, which was diagnosed 15 years ago.

“My disease,” he said, “I take it with humor and resignation. I feel that my body is occupied by numerous children that cannot be controlled. My hands, my legs, and my arms, they do whatever they want.”

After his stint at Harvard, Zurita will travel to the Netherlands and then India before returning to Santiago, where he teaches literature at the Diego Portales University. When he’s not writing papers, preparing classes, or traveling around the world, Zurita has busied himself with a translation of “The Divine Comedy,” which he started three years ago. He first heard about Dante from his Italian grandmother, who helped his widowed mother raise him in the 1950s in Santiago.

For all his accomplishments, Zurita still recalls the financial hardships he experienced in the early years of his career. To feed his family, he worked in construction and selling calculators. “There was so much poverty during the dictatorship but nobody wanted or wants to talk about it,” he said.

His own life has included versions of hell and purgatory, he said, but he remains convinced that art’s goal is the pursuit of happiness.

“Even if the evidence at hand suggests that pursuing paradise on earth is foolish,” he said. “I still think that the goal of poetry and art in general is to build a world that is worthy, egalitarian, and filled with love and compassion.”