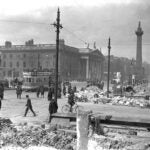 Ireland at the breaking point

As president’s tenure wanes, visit allows him to cement policies

President Barack Obama arrives in Cuba on Sunday for a historic three-day visit — the first sitting U.S. president to travel there in nearly 90 years. The trip marks a major step toward normalizing diplomatic relations between the United States and Cuba, which were severed in 1961 during the Cold War era, after Fidel Castro took power and established the first communist regime in the Western Hemisphere.

The visit, a mix of politics and culture, will include a bilateral meeting with Cuban President Raúl Castro, Fidel’s brother, at the Palace of the Revolution, a baseball game, interviews with entrepreneurs and citizens, and a speech by Obama to the Cuban people. First lady Michelle Obama and daughters Malia and Sasha are accompanying Obama.

The journey, Harvard scholars say, represents the culmination of Obama’s efforts to re-establish ties with Cuba that began in late 2014 when he announced his commitment to chart a “new course” for U.S.-Cuban relations. As part of this process, he ordered the reopening of the American embassy in Havana, ruled in favor of easing travel and fiscal restrictions, and allowed more daily flights.

In interviews, Harvard analysts praised Obama for charting a fresh beginning in U.S.-Cuban relations and called his endeavors to restore normality long overdue, but they also expressed concern about the real impact of the shift on the everyday lives of Cubans.

For Kirsten Weld, assistant professor of history, the trip is a recognition of the failure of the U.S. policy of economic sanctions against Cuba, a policy that has remained in place for more than 50 years.

“It’s an acknowledgment that the past half-century of punitive, coercive U.S. policy toward Cuba, having failed to produce the regime change U.S. policymakers have so long desired, is futile and obsolete,” said Weld via email.

Weld worries that the shift in strategy in U.S. policy from isolation to engagement is a demonstration that the United States continues to try to exert a disproportionate influence over domestic Cuban affairs, and wonders about its legacy locally.

“It remains uncertain,” she said. “The economic embargo, for example, remains solidly in place, and until it is lifted, daily life for Cubans will continue to be inordinately difficult.”

The trip is more than symbolic for Jorge Domínguez, Antonio Madero Professor for the Study of Mexico in the Department of Government, chair of the Harvard Academy for International and Area Studies, and a member of the executive committee of the Weatherhead Center for International Affairs.

“The president has practical objectives in mind,” said Domínguez. “One of the topics I’d imagine Obama will address in his meeting with Castro is the significant influence that Cuba has on Venezuela, Ecuador, and Bolivia, because what Cuba will or will not use its influence for matters to the United States.”

The trip is also imbued with a sense of urgency, said Domínguez, because Obama is in the last months of his administration, and with the U.S. presidential elections in some turmoil, Obama likely feels pressed to make sure his legacy lives on.

“I think he also wants to say to Raúl Castro, eye to eye, ‘Look, I just have until next January to try to make sure that changes get enacted and consolidated. We cannot foresee who is the next president of the United States, and if we act now, we may be able to make these changes irreversible,’ ” said Domínguez.

Still, Obama’s trip is filled with rich symbolism for Cubans and Americans, he said. For Cubans, it will send a message that it’s up to Cubans to put pressure on their government to make more changes. As of now, the U.S. government has initiated many policy shifts, and Cuba has passively accepted them. A recent example is the restoration of direct mail between the two nations.

For Americans, the implication is that there is no turning back from increased ties.

“The message is that this train has left the station,” Domínguez said, “and whoever is the next president of the United States should run with it.”

The re-establishment of diplomatic relations will bring benefits to both countries, said Brian Farrell, director of the David Rockefeller Center for Latin American Studies, professor of biology, and curator of entomology at the Museum of Comparative Zoology.

“It will be a mutually enriching exchange,” Farrell said. “We have so much to learn from Cuba in science, the medical area, and health care.”

But the greatest benefit will be in people-to-people exchange, he said.

“Cubans and Americans have been estranged family members,” Farrell said. “This is an extraordinary moment to be able to get to know each other, in the same way our neighbors, Canada and Mexico, have been doing it. Canadians, Mexicans, and Europeans have had uninterrupted access and exchange with Cubans. It’s going to be a great reunion.”