Ireland at the breaking point 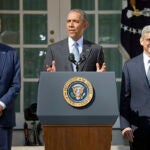 Nearly everybody in the Boston area knows that March 17 is the feast day of Patrick, patron saint of Ireland. Perhaps fewer are aware that in 10 days’ time, the Republic of Ireland will celebrate its 100th anniversary as an independent nation. Professor Catherine McKenna guided the Gazette through the struggle behind that independence.

The date of Ireland’s Easter Rising was not March 27, even though that is when the official centennial celebrations will be held in Dublin. The uprising in 1916 was launched on Easter Monday — a holiday in Ireland then and now — which that year fell on April 24.

The rebels chose Easter weekend as the time to act in part because of the holiday’s religious resonance. Rebel leader and poet Padraic Pearse “was nothing if not full of a sense of symbolism and especially Christian symbolism,” said McKenna, chair of Celtic Languages and Literatures. When the rebels took over key buildings in Dublin that day, Pearse hoped to convey a notion of “blood sacrifice,” said McKenna, who is preparing a seminar for the fall called “Ireland Rising.”

“They really knew that they, this little group of people, weren’t going to succeed” or in many cases even survive. “And yet they felt that this was the sacrifice that could finally bring [Ireland’s freedom] about.”

Ireland has not technically been independent, or a Republic, for 100 years. The rising was “ineffectual” in the short term, McKenna said, though largely successful in the long run. In the aftermath of World War I, Ireland’s war of independence ended, in 1922, with a controversial compromise: The six counties of the Protestant-dominated North remained part of the United Kingdom (as they do today), while the rest became the Irish Free State, a constitutional monarchy within the British Commonwealth.

In other words, Ireland operated with autonomy but continued to recognize the King of England as its ceremonial head of state. Finally, in 1949, Ireland’s legislature passed the Republic of Ireland Act and the nation peacefully seceded from Britain altogether.

The Easter Rising almost didn’t happen. “Eoin MacNeill, who was one of the leaders [of the Irish Volunteers] tried to call this thing off at the last minute,” said McKenna. On Saturday, April 22, MacNeill issued countermanding orders canceling exercises originally scheduled for the following day. The rift among the paramilitary Volunteers, between moderates such as MacNeill and the Irish Republican Brotherhood–led faction that included Pearse, sowed confusion in the ranks and postponed the rebellion by one day.

When it did start, the rebellion seemed doomed to fail. An expected shipment of arms from Germany failed to land, and the rising was localized almost entirely within Dublin. About a thousand rebels occupying the General Post Office, City Hall, and other major buildings across the city held out for a week, but ultimately were no match for the British Army’s artillery and experience.

Moreover, the general population did not initially back the rebels.

“It was so complicated,” said McKenna, “because so many Irish were at that time enlisted in the British Army, fighting in the First World War, and suffering the horrors that people were suffering [on the Continent].” Many felt the rebels “were really kind of selfish brats in a way, to be doing this sort of thing at this time.”

“But then the British overkill response,” as McKenna put it, changed the equation. Once the shelling was over, large sections of Dublin lay in ruins, and 447 people were dead, most of them civilians. In the weeks following, the authorities executed 15 of the rebel leaders, including a wounded James Connolly, who had to be tied to a chair so that the firing squad could take aim.

The rebel leaders were language geeks, history buffs, poets, arts enthusiasts, and football players. It almost sounds like a collection of Harvard students. In fact, beginning in the 1880s, amid lingering memories of the devastating Potato Famine, the revival of interest in the Irish language and in the island’s ancient legends, traditional arts and crafts, and native sports was a major part of Ireland’s fight for freedom.

That traditional culture had lately suffered from emigration and denigration. Gaelic speakers were typically the country’s poorest residents, those most likely to move abroad for work; while those left behind “almost bought into” the notion that Ireland was a backward place “that needed English civilization in order to bring it into the modern world,” McKenna said. The rebels of 1916 belonged to a broader movement that sought to reclaim Ireland’s own centuries-old civilization as a positive, forward-looking force.

“What creates, or recreates, a nation?” McKenna asked. “It’s not only the establishment of political institutions and government institutions but that of a sense of cohesiveness as a people, and a sense of identity as something other than a colonized population.”

The centenary will be quite different from the 50th and 75th anniversaries of the Rising. “In 1966,” McKenna said, “it was all about rebel songs [and] stirring things up … The thrust of it was almost, ‘The job isn’t done yet.’ By the time you got to the 75th in 1991, we’d really been a long time into the Troubles,” in which the Provisional IRA battled British troops and Royal Ulster Constabulary officers in the North throughout the 1970s and ’80s. The anniversary of the Rising, therefore, was “so low-key,” said McKenna.

If the centennial is different it might be not just in context but also purpose, with an emphasis more on teaching the young than pride and politics.

“People are suddenly realizing that they are very much on the cusp of losing the memory of this important event, and they’re digging into archives and talking to the people who remember people who were there,” said McKenna. “It’s really about our heritage being re-examined closely.”