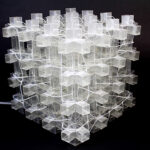 3-D material changes shape as it prepares for next task

Research shows how processing food was turning point for humans

Although you probably enjoy a few meals every day, chances are that you spend very little time and muscular effort chewing your food. That kind of casual eating is very unusual. Our closest relatives, chimpanzees, spend almost half their day chewing, and with much greater force.

When did eating become so easy? And what were the consequences?

According to a new Harvard study, our ancestors between 2 and 3 million years ago started to spend far less time and effort chewing by adding meat to their diets and using stone tools to process food. Those changes would have saved early humans as many as 2.5 million chews per year, the researchers say, and enabled further changes that helped make us human. The study is described in a March 9 paper in Nature.

One of the biggest puzzles in human evolution is how species such as Homo erectus evolved smaller teeth, smaller faces, and smaller guts, and yet managed, before cooking, to get more energy from food to pay for their bigger brains and bodies.

“What we showed is that … by processing food, especially meat, before eating it, humans not only decrease the effort needed to chew it, but also chew it much more effectively,” said first author Katherine Zink, a lecturer working in the lab of Daniel Lieberman, the Edwin M. Lerner II Professor of Biological Sciences.

By changing their diets to include 33 percent meat and processing their food, early humans reduced the muscular effort required per chew and the number of chews per day by almost 20 percent. The researchers also found that slicing meat with simple tools allowed for more easily digestible meals. 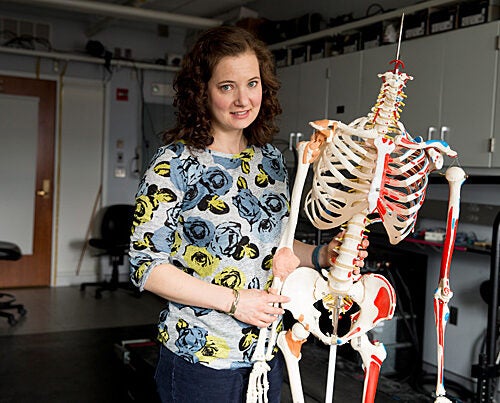 Study shows that wider does not equal less efficient locomotion

Testing a process as basic as chewing wasn’t as easy as it might sound.

“What Katie did was creative but sometimes, frankly, a little stomach-churning,” Lieberman said. “Not only did she have people come into the lab, chew raw meat and other foods, and spit them out, but then she had to analyze the stuff.”

To approximate the toughness and texture of the game early humans ate, Zink and Lieberman, after much experimentation, settled on using goat. Instruments attached to subjects’ jaws allowed Zink to measure effort.

In each trial, volunteers were randomly given foods prepared in several ways — raw, sliced, pounded, and cooked goat, as well as several vegetables, including carrots, beets, and yams. After chewing each morsel until they would normally swallow, the volunteers spat out the food. Zink then spread the individual food particles on a tray, photographed them, and digitally measured size.

“What we found was that humans cannot eat raw meat effectively with their low-crested teeth. When you give people raw goat, they chew and chew and chew, and most of the goat is still one big clump — it’s like chewing gum,” Lieberman said. “But once you start processing it mechanically, even just slicing it, the effects on chewing performance are dramatic.”

“Most other animals, like reptiles, barely chew their food — they just swallow it whole,” Lieberman said. “The evolution of the ability to chew food into smaller particles gave mammals a big boost of extra energy because smaller particles have a higher surface area-to-volume ratio, allowing digestive enzymes to then break food down more efficiently.”

Most mammals have low-quality diets — think of cows eating grass and hay — that require hours and hours of chewing. Even humans’ closest ape relatives, with a diet that consists mainly of fruit, must spend nearly half their day chewing to extract enough energy from their food, Lieberman said.

“But we humans have done something really remarkable,” he said. “We eat even higher-quality foods than chimpanzees, and spend an order of magnitude less time chewing them.”

Making that change presented early humans with a new challenge. One of the critical components of that higher-quality diet is meat, which, despite being calorically dense, is difficult for humans to chew effectively.

“Meat has a lot of nutrients, but it is also very elastic,” Zink said. “You can think of it as being like a rubber band. So the problem is that we can’t break it down with our flat, low-cusped teeth. But if you slice it up, then you do not need to use your teeth to break it down as much, and you swallow much smaller particles. Cooking makes chewing even easier.”

That preprocessing, and the reduction in chewing effort that came with it, may have opened the door to one of the most important lifestyle changes in human evolution — the emergence of hunting and gathering.

“We went from having snouts and big teeth and large chewing muscles to having smaller teeth, smaller chewing muscles, and snoutless faces,” Lieberman said. “Those changes, and others, allowed for selection for speech and other shifts in the head, like bigger brains. Underlying that, to some extent, is the simplest technology of all: slicing meat into smaller pieces, and pounding vegetables before you chew them.”