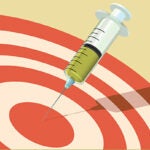 Study shows that wider does not equal less efficient locomotion

Among the ideas so widely accepted that they are rarely, if ever, studied is the notion that wider hips make women less efficient when they walk and run.

For decades, this assumption has been used to explain why women don’t have wider hips, which would make childbirth easier and less dangerous. The argument, known as the “obstetrical dilemma,” suggests that for millions of years humans and their bipedal ancestors faced an evolutionary tradeoff in which selection for wider hips for childbirth was countered by selection for narrower hips for efficient locomotion.

New research, however, signals that what was widely assumed to be fact is almost entirely incorrect.

The study, conducted by researchers at Harvard in conjunction with colleagues at Boston University, Hunter College, and Washington University, St. Louis, shows no connection between hip width and efficient locomotion, and suggests that scientists have long approached the problem in the wrong way. The work was described in a March 11 paper in PLOS ONE.

“This idea that pelvic width for birth and pelvic width for locomotion are connected is deeply ingrained in this discipline,” said Anna Warrener, the study’s first author and a postdoctoral fellow working in the lab of Daniel Lieberman, the Edwin M. Lerner II Professor of Biological Sciences and the chair of the Department of Human Evolutionary Biology. “Everyone thinks they know this is true … but it’s wrong, and it’s wrong for two reasons. First, the way we had modeled the forces involved didn’t make sense. Second, we found that you can’t predict, from the width of the pelvis, how much energy someone is using, so we’ve been looking at this biomechanical problem entirely wrong.”

The study grew out of research Warrener conducted as part of her Ph.D. at Washington University, St. Louis, which she completed under the supervision of Herman Pontzer, now a professor of anthropology at Hunter College, and himself a former Ph.D. student under Lieberman, and Erik Trinkaus.

Lieberman and Kristi Lewton, a former postdoctoral fellow in Lieberman’s lab who is now at BU, were exploring the same problem at the same time. When the teams discovered they’d been working on similar tracks, they decided to combine their efforts into a single study.

“This is an idea — that wider hips make you less efficient — that’s been taught for 30 years,” said Pontzer. “And I think Anna has shown very nicely, in collaboration with Kristi and Dan and I, that this just isn’t true.

“Good science is about taking a critical look at things we take for granted,” he continued. “So I think it’s wonderful that what seemed to be settled science can be completely overturned by this really beautiful data. This is going to change the way we teach Anthropology 101 everywhere, and it’s going to change the way we teach about human evolution and walking adaptations and the birth of babies. I think it’s a great example of how new things can be uncovered when you really bother to look deeply at accepted ideas.”

At the heart of why the earlier ideas were wrong, the researchers discovered, were fundamental problems with the simple biomechanical models used to understand the forces acting on the hips.

“If we only had a pelvis and a femur, the old model might be correct,” Lieberman said. “But we also have a shank, and an ankle, and a foot. And when you place your foot on the ground, forces don’t just shoot straight up from the ground to your hip. By the time they arrive at your hip, they aren’t acting on your body in this idealized way.”

To understand what was really happening, the researchers turned to a biomechanical technique known as inverse dynamics.

“Essentially, what we did was to measure the chain reaction of forces as they move through the body, starting at the foot and progressing up the leg to the hip,” Warrener said.

Rotational movements at all joints, including the hip, are the product of forces generated by muscles or gravity, and a key biomechanical variable known as a moment arm, or lever arm.

When Warrener and her colleagues began studying scans of volunteers with a variety of body shapes, however, they found that the evidence to support that theory was lacking.

“What we found is that that the true moment arm measured during locomotion is uncorrelated with the assumed moment arm determined from the width of the pelvis,” she said. “So you can have a wide pelvis and a small moment arm, or you can have a narrow pelvis and a very long moment arm. That means you can’t predict anything about how hard those abductor muscles are working to counteract torque based on the width of the pelvis, and therefore you can’t predict anything about how much energy they’re using.”

Said Lieberman: “The bottom line is that people with wider hips don’t have higher costs for locomotion. In fact, if you look at old studies that compared how efficient men and women are, they have always showed no difference. We have long had plenty of data to disprove the idea that men are more efficient than women at walking and running — but now we know why it’s wrong.”

If wider hips don’t equate with less efficient walking or running, it raises two questions — why has the incorrect assumption persisted for so long, and why don’t all women have the widest hips possible to allow for easier childbirth?

For the first, at least, the answer may have much to do with long-held cultural biases.

Until recently, Lieberman said, portrayals of hunter-gatherer societies imagined that men — who were responsible for hunting — were far more active than women. More recent studies, however, show this to be untrue.

“For most of evolutionary history, women have done a great deal of work,” he said. “Hunter-gatherer women walk, on average, nine kilometers a day, so it makes sense that they would be just as efficient as men, because women have to work just has hard as men. In addition, women are metabolically responsible not just for themselves but also for their infants.

“They have to pay the metabolic costs of gestation and nursing, and they have to feed dependent offspring, so they almost always need to save energy,” Lieberman continued. “Women are under very strong selection to be efficient. So you’d predict they would also be efficient at walking as well, and that’s exactly what we found.”

While the researchers don’t have an answer for why all women don’t have the widest possible hips, one hypothesis advanced by Warrener and colleagues suggests that the problem may be that the modern world is drastically different from any environment in human history.

“One idea my lab studies is the idea of mismatch,” Lieberman said. “Our bodies are not always very well adapted for the novel environments in which we now live. One novel problem is too much energy. Women, including pregnant women, now have access to a lot more energy than they used to, and they have to work less. So we’ve gone from women being on the margin of just having enough energy, to suddenly having more energy than necessary. One result may be that babies have recently started to get too big to fit through their mother’s birth canals.”

Researchers will need additional data before they can fully understand the problem, Warrener said.

“The take-home message is that until recently, the maternal pelvis was well-adapted for both its locomotor function and for giving birth. Natural selection demands that reproduction work. But the fact that both the development of the pelvis and a baby’s size are strongly influenced by external environmental factors that have been changing rapidly in the last 10,000 years means that our current levels of birth difficulty aren’t a good measure of what was happening in the past. What we really need is better data on birth outcomes and infant size in hunter-gatherer populations whose lifestyles are probably a better reflection of the conditions we evolved to deal with.”