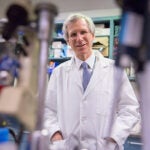 Added caution on pregnancy and alcohol

It remains one of the most fundamental questions in neuroscience: How does the flood of sensory information — everything an animal touches, tastes, smells, sees, and hears — translate into behavior?

A state-of-the-art microscope, which allows scientists to peer into the brains of animals in real time, may provide the answers.

Built by Vivek Venkatachalam, a postdoctoral fellow working in the lab of Professor of Physics Aravinthan Samuel in collaboration with fellow postdoc Ni Ji, Professor Mark Alkema of UMass Worcester, and Professor Mei Zhen, a former Radcliffe Fellow at the University of Toronto, the microscope captures 3-D images of all neural activity in the brains of tiny, transparent C. elegans worms as they crawl.

The microscope is described in a recent paper published in the Proceedings of the National Academy of Sciences.

“We needed a tool to characterize the entire sensory periphery of an animal as well as the motor dynamics that reflect decision-making,” Samuel said. “This tool, in conjunction with other techniques, including behavior analysis, neurogenetics, and connectomics, will allow us to do something truly comprehensive.”

What that something is, Samuel said, is to record — 10 times a second — the precise location and activity of every neuron, and to link that data with neural “wiring diagrams.”

“We have long been recording behavior in worms, but we and others have concluded that, if you want to get physiologically relevant neural activity patterns, you have to look at neurons inside a behaving animal,” Samuel explained. “Only in that context are all feedback loops intact, where behavioral output modulates neural activity which, in turn, shapes behavior.”

Though the brains of other animals can be imaged — similar techniques have been used with larval zebrafish in the past — whole nervous system wiring diagrams have not yet been mapped for other species.

Capturing all the neural activity in the brain, however, is easier said than done.

To pull it off, Venkatachalam built a complex microscope that can not only track the worms’ movements, but also capture images of all the brain’s neurons as they fire in 3-D

“What we’re doing is capturing these volumes and trying to figure out where the neurons are in that volume,” he said. “Every frame will have the neurons in slightly different positions, because the worm distorts itself as it crawls … so we wrote software that can track where those neurons are over time.”

Using fluorescent markers, researchers then extract the activity of the neurons and identify which neural pathways are active. With a simple model of how the worms crawl, researchers also reconstructed the worms’ posture, enabling them to connect specific neural activity patterns to movements.

“Without studying the posture over time, we don’t have a way of connecting the brain activity to what the worm does,” Venkatachalam said. “This helps us create a full picture of how activity in the brain governs behavior, and it allows us to say we understand the entire behavior this worm performs.”

Ultimately, Samuel said, the microscope will be used to study a wide range of questions in neuroscience. The new tool complements and draws upon the wide range of powerful tools and knowledge already available in the worm. This is reflected in how the study arose from an extensive collaboration between the Samuel, Zhen, and Alkema labs with other C. elegans experts, including Andrew D. Chisholm at University of California, San Diego, and Jagan Srinivasan from Worcester Polytechnic Institute. The prospect of future collaboration in many areas of worm neuroscience is enticing.

“We can now think about C. elegans as a model for systems neuroscience,” Samuel said. “We can look at how a large number of neurons interact and how they process information in an animal where we know which neuron is connected to which throughout the animal by every synapse.”

One day, Samuel said, researchers may be able to monitor all the worms’ neural activity as they grow from birth to adulthood in an effort to understand the functional and structural basis of the maturation of behavior.

“Combining molecular and cellular analysis of the nervous system with structural analysis and physiological analysis … with the worm and its behaviors, we can bring all those tools to bear at once,” Samuel said. “This is what we’re looking forward to.”