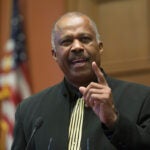 For every nation, a different set of challenges, panelists say

A panel discussion Wednesday highlighted striking contrasts in how nations perceive and grapple with racial inequality.

Tracing evolving attitudes toward race and discrimination in Latin America, Europe, and the United States, a trio of experts painted a picture of a multidimensional issue resistant to simple explanations or solutions.

The panel was the second of four in a Weatherhead Center series on comparative inequality.

Patrick Simon, director of research at the National Institute of Demographic Studies in France, said post-war Europe followed a conscious strategy to ban the use of racial terminologies to describe populations, a practice that persists.

“We are all aware that talking about race is not a straightforward situation in Europe,” said Simon, currently a fellow at City University of New York. “Basically, if you don’t talk about race, the name itself is simply not there.”

Simon said the strategy was contradicted at first by continuing racial categorizing in European colonies. That ended with decolonization, but as citizens of those countries migrated to Europe, “race is back in the picture,” he said, “in societies not prepared to address racial issues.”

“Now that there is real racial diversity, this color-blind strategy finds its limits,” Simon said, arguing that the approach — including resistance to directly including race in official data collection — hinders efforts to “change the dynamics of racializing.”

Contrary to claims by critics, he said, this vision of racial democracy was not created by elitists, but arose from moments of social conflict. And while utopian, it has had positive effects, de La Fuente said, including helping to inspire inter-racial labor movements.

“The ideologies of racial democracy may in fact have facilitated the development of legal and policy regimes that seek to correct racial injustices in the region,” he said.

Michèle Lamont, Robert I. Goldman Professor of European Studies and director of the Weatherhead Center, discussed her work on two books that found sharp contrasts in French and American perceptions of class and racial boundaries, one focusing on the upper-middle class and the other on working-class people.

Also notable was the notion in the United States that “if you can buy a house and I can buy a house we are equal, which is an argument you would never find in France,” said Lamont, also a professor of sociology and of African and African American Studies.

With six co-authors, Lamont is finalizing a new book that analyzes how members of five particular groups — in the United States, Brazil, and Israel — experience exclusion on a daily basis. In line with her work on previous books, the authors found notable contrasts.

For African-Americans in the United States, she said, the response to discriminatory treatment “is always to confront.” But among Israeli Palestinians, the response “is no response,” she said. “They are so desperate they have no hope of being integrated. All they try to do is stay out of trouble.”

Lamont said that while varied, the work she and her forum colleagues are undertaking all points to how “political ideologies may empower and constrain social change in very different ways across societies,” while exploring the conditions needed to “enable greater social change.”