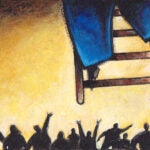 Veteran reporter shares views on presidential race ahead of N.H.

The Iowa caucuses boosted the campaigns of Ted Cruz and Marco Rubio, but Donald Trump remains the Republican favorite as the presidential primary race steams toward New Hampshire, veteran reporter Bob Schieffer said during a talk at the Kennedy School on Wednesday.

In the Democratic contest, Hillary Clinton still holds a clear advantage for the nomination even though Bernie Sanders nearly edged her in Iowa and is poised to win Tuesday in New Hampshire, he added.

Schieffer, whose 46 years at CBS included a long run as anchor of “Face the Nation,” is currently a fellow at the Shorenstein Center on Media, Politics and Public Policy, with a special focus on the presidential race.

Rubio’s strong third-place finish behind Cruz and Trump was Iowa’s “biggest story,” Schieffer said, adding that with his solid showing, the Florida senator calmed the nerves of Republican leaders eager to find a viable alternative to the party’s two front-runners.

“The great sound you heard was a great sigh of relief from the Republican establishment when it became clear that Marco Rubio was going to run third in Iowa.”

Schieffer said Iowa also demonstrated Cruz’s strength, noting that the Texas senator “had a terrific ground game out there, his people actually came out, and he won.”

As for Trump, his “whole campaign has been based on ‘I am a winner,’ so when the winner loses that’s pretty big news.”

Still, Schieffer said, “As of right now, I think you still have to say Trump is the favorite to get the Republican nomination.” He cited poll numbers showing the New York businessman with a strong lead in New Hampshire and an even larger one in South Carolina ahead of its Feb. 20 primary.

Iowa was a “clear victory” for Sanders, Schieffer said, and the Vermont senator is positioned for a strong showing in New Hampshire, based on polls and his neighbor-state status.

“But I’m not sure the Sanders campaign can go much beyond New Hampshire,” Schieffer said. He cited Clinton’s large lead in South Carolina polls, and Bill Clinton’s continuing popularity with African-Americans, who make up a large segment of Southern primary voters.

Hillary Clinton “is going to march through the South and … win all those primary delegates,” he said.

Clinton’s prospects in a general election are less clear, Schieffer said. He cited Iowa exit polls showing that while the former secretary of state was the strong choice of voters concerned with policy issues such as health care, she fared poorly among those citing personal qualities like trustworthiness.

“And I think she’s a much better candidate than the campaign she’s been running,” Schieffer said. “It seems to me her presentation is wooden, it seems heavily rehearsed.”

What Democrats have going for them, Schieffer said, is “the constant barrage of anti-immigrant talk” on the GOP side. Referring to Latinos, he said, “Anybody who thinks you can write off the fastest-growing segment of our population and think that they are going to win national office is just simply wrong.”

Addressing the appeal of candidates outside the establishment, notably Trump, he said, “People are frustrated, they’re upset, they don’t feel their voices are being heard.” Cruz has also tapped into this sentiment, drawing votes from conservative Tea Party members along with evangelicals. But it is not clear how far his support extends beyond that, Schieffer said, pointing to the senator’s deep unpopularity with Republican leaders as a particular challenge.

“He came to Washington and made no effort to make friends, and he succeeded beyond his wildest dreams.”

Bob Schieffer, Walter Shorenstein Media and Democracy Fellow, veteran CBS reporter, and former moderator of “Face the Nation,” discussed this week’s Iowa Caucuses, and looked ahead to the upcoming primaries and general election.