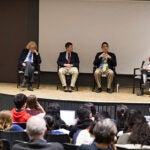 In the past, crops such as corn were planted in precisely spaced, perfectly parallel rows, with each stalk a foot or more apart to allow the plants ample room to grow.

These days, with new seed varieties developed over the past century, corn stalks are often just inches apart, allowing farmers to plant far more than in the past. Crops are also highly fertilized and, in some areas, irrigated. Those changes, researchers say, have resulted in land-use patterns so intense they can actually change the surrounding climate.

In a surprising finding that runs counter to most climate change research, Harvard scientists examining temperature records have shown that, in regions with the most intense farming, peak summer temperatures have declined over the past century. The study is described in a paper published earlier this year in Nature Climate Change.

“When we began examining changes in extreme summer temperatures, we found a surprising spatial pattern, with cooling occurring right over those regions where crop production is the dominant land use,” said Nathan Mueller, a postdoctoral fellow in Harvard’s Department of Earth and Planetary Sciences and the Department of Organismic and Evolutionary Biology. “We concluded that the intensification of summer crops in the U.S. has led to greater evapotranspiration, or water flux from the surface to the atmosphere, and that shift results in a regional cooling effect on hot summer days.” 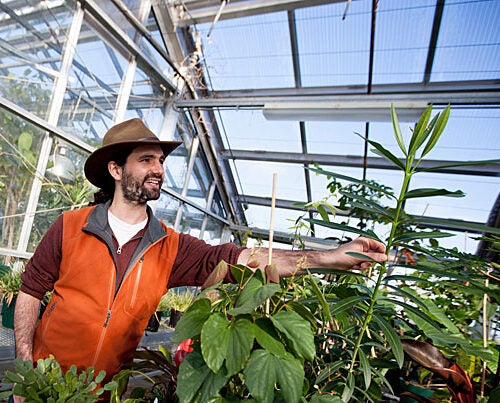 Corn in a changing climate

Adaptive ability of crops can reduce damages from warming weather

But that effect, Mueller said, shouldn’t be seen as an answer to the increased temperatures that come with climate change.

“In the summer, temperatures on the hottest days have decreased, but the overall U.S. temperature trend across all seasons is toward warming,” Mueller said. “Climate responds to numerous influences which vary across seasons, and in the summer we are identifying a strong climatic signal of changes to land management.”

Over the past century, those changes have been dramatic. Both the planting density and the types of crops planted have changed, Mueller said.

“We used to grow a lot of oats, because they were needed as feed for horses that worked on farms,” Mueller said. “But oats are an early season crop over the upper Midwest, with harvest dates in late July and early August.

“Today … we tend to plant crops with long summer seasons,” he added. “As these fields are actively growing over the whole summer, they are also using water through transpiration, which can lead to local cooling.”

Mueller warned, however, that there are limits to how long the cooling might last.

“It’s unclear how long this effect will persist because we continue to pump CO2 into the atmosphere,” he added. “As the CO2 concentration increases, so does the water-use efficiency of plants, and that could dial back evapotranspiration-influenced cooling. And, of course, CO2 and other greenhouse gases are contributing to an overall warming effect.”

To understand the relationship between land-use patterns and temperatures, Mueller and colleagues compared agricultural census data collected by the USDA with temperature data from a network of weather stations across the country.

“Using a statistical method called quantile regression … we were able to show that over cropland, there was a decrease in the 95th percentile of summer temperatures,” Mueller said. “Initially, we thought this might be skewed by the Dust Bowl years, or might be influenced by the effect of aerosols on climate from the ’70s to the ’90s, but when we removed those periods, we still found this decline, indicating that the substantial land-use change over the region may have played a role. Examining the USDA data, we found a strong spatial correlation between the increase in crop productivity on the landscape and the observed cooling.”

To confirm their theory, Mueller and colleagues compared the results from both irrigated and rain-fed areas, and found that while irrigated areas sustained cooling trends even during drought conditions, rain-fed landscapes only showed temperature reductions if they received enough water.

“That showed the cooling trend only exists when the crops have sufficient soil moisture,” Mueller said. “It doesn’t matter if you apply nitrogen, if you have the latest seed varieties, or if you pack in your seeds very tightly — evaporative cooling depends on adequate moisture supply.”

Ultimately, Mueller said, the study should serve less as a warning on the potential long-terms effects of climate change and more as an insight into the ways land use can influence surrounding climate.