Corn in a changing climate 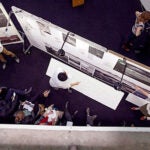 A military base, reborn

Adaptive ability of crops can reduce damages from warming weather

The past year has not been kind to corn.

Though it has long been the nation’s largest crop, the one-two punch of historic drought and record-high temperatures in July and August combined to damage U.S. corn crops, which fell by as much as 13 percent.  Previous studies have suggested that weather-related damage is linked to climate change, and have warned that losses like those of the past year could become the norm by 2030. But the effects of weather and climate can differ because the latter can be adapted to more readily.

Through analyzing U.S. corn yields and weather variability, graduate student Ethan Butler and Peter Huybers, professor of Earth and planetary sciences, found that corn is well adapted to local climates, with hot temperatures in the deep South reducing yield only half as much as the same temperatures in the far North. They found that a 2-degree Celsius warming would reduce yields by 14 percent without adaptation, but that if today’s adaptation is used as a surrogate for the future, losses are reduced to only 6 percent. Their work is described in a Nov. 18 paper in the journal Nature Climate Change.

“As an enterprise, agriculture is all about humans understanding their relationship to the environment, so it seems unreasonable to think farmers won’t make these types of changes,” Butler said. “But that’s not to suggest there is nothing to worry about. A 6 percent loss is still worse than 2 percent, or no loss. This does show, however, that adaptation by farmers can lead to substantially reduced damages.”

To lessen that potential damage, Butler and Huybers first set out to understand how sensitive corn crops are to temperature changes.

“What we’re trying to get at is how adaptable corn is,” Butler said. “The first step in that is to understand how well the crops react to the conditions they experience, or how sensitive they are to the ‘good’ and ‘bad’ days.”

In general, Butler said, the ideal temperature for growing corn is about 29 degrees Celsius. If temperatures stay below that threshold, the plants benefit; much above it, they wither on their stalks. By combining U.S. Department of Agriculture data on corn yields and weather data, Butler was able to build a model that predicted how weather affected yields, based on previous experience.

The next step, Butler said, was to determine whether geography played a role in crops’ sensitivity.

“Our expectation was that maize is adapted to where it’s grown, and that’s exactly what we found,” he said. “Relative to Southern maize, Northern maize is more sensitive to temperature. It gets a bigger boost from the good days, but also gets hit harder by the bad days.” That makes sense given that Northern maize has a shorter season in which it must mature and is less likely to experience heat.

“Our assumption is that this relationship between the climatology of hot days and the sensitivity to hot days is due to differences in the variety of maize — called maize cultivars — that are grown in different parts of the U.S.,” Butler said.

“Everyone is interested in getting the most out of the land that they can,” he said, “and it can be expected that as temperatures continue to rise, farmers will shift cultivars toward being more heat tolerant.” For instance, farmers in the Northern part of the country may need to adopt varieties with traits more like those in the South.

These results suggest that the effects of climate change on crop production may not be as bad as earlier analyses suggested, but there are other factors to consider. “If future climate change only entails a 2-degree rise in mean temperatures,” Butler said, “our analysis indicates that most of the damages to yield can be averted. But if mean temperature rises much more — or comes along with more heat waves, droughts, and extreme wind events — the consequences for yield will be more dire.”