Keeping up the fight 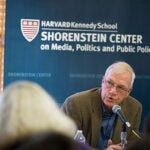 Scholar at Risk pushes for change in Ethiopia

Beekan Erena’s path to Harvard returns to the suffering he witnessed as a boy in the Oromo region of Ethiopia.

“Poor people were segregated, rejected,” he said. “I wept.” Erena was only 7 years old, living on the edge of poverty in a small grass hut with no running water. But he was determined to find a way to help “these people become equal, because they are born equal on this planet. My vision is to resolve injustice.”

That vision animates his work today. An educator and award-winning author, Erena is on a mission to help the plight of the Oromo people, the largest ethnic majority in Ethiopia, who have struggled for years for political and economic equality. As a 2015-2016 Scholar at Risk supported by the Hutchins Center, the 32-year-old Erena has been focused on the Oromo struggle for self-determination and recent clashes between students and government security forces.

The Scholars at Risk Program, now in its 14th year, offers 10-month to yearlong fellowships. This year’s six participants come from Ethiopia, Syria, Pakistan, Yemen, and Guatemala. Their fields include literature, law, religious studies, and medicine.

Born into a farming family, Erena worked in the fields through childhood, putting the money he earned toward his schooling. He was just as determined to help others learn. In the ninth grade, Erena borrowed chalk and a board from a town building, turned a small tent into a schoolhouse, and in the early mornings taught close to 80 farmers who had never been inside a classroom. Forty of them went on to university studies.

“I believe in ideas,” said Erena. “That’s why I need to be a teacher.”

With a master’s degree from Addis Ababa University in the capital, Erena taught for three years at Ambo University, also in Ethiopia, developing as a writer all along. He is the author of 33 book-length works, writing in Afaan Oromo, English, and Amharic. (He’d like to write 300, eventually.) His work ranges from what Erena calls “resistance novels” to romance stories to poetry to studies of Oromo folklore, language, and culture.

Fighting for the rights of others has been a constant in Erena’s life. In 2014 he spoke out against the government’s plans to take over land in the Oromiya region in the central southern part of the state. “This is your land,” Erena told local farmers. “You have to fight.” His comments landed him in jail, where he was beaten. On his release, government officials promised him a car and a home if he kept quiet. He refused.

In and out of jail six more times, he was repeatedly beaten, and threatened with a gun to his head. His tormentors told him, “We will kill you. You won’t know the time, you won’t know the day.”

Soon after, Erena came to Harvard with his wife, Yube, a nurse. He knows he was lucky to escape with his life. Many friends died in prison.

The crackdown has continued in recent months, rights groups say, with more than 200 protesters killed and thousands arrested by security forces during demonstrations ignited by the government’s plan to expand the boundary of the capital into Oromiya. The plan, now halted, had been criticized as an unjust land grab that would displace countless farmers in favor of developers.

From Cambridge, Erena has stayed connected to his country, pressing his case for change through radio and television stations that broadcast in Ethiopia.

“I have to speak for the voiceless people. For people who aren’t able to speak for themselves. Every social injustice is not only cruel, but causes economic waste and generational loss. Equality, free expression, justice, peace, and freedom are key for the generation’s continuation and for changing the world.”