A religion course for the Internet age 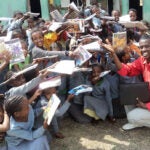 Keeping up the fight

Harvard Divinity School senior lecturer Diane Moore has modest goals for her upcoming online course, “World Religions Through Their Scripture.” She merely wants to increase religious understanding, open up crucial dialogues, and change the world — or at least to create a MOOC that will examine religion in a uniquely enlightening way.

The course, which launches this spring, will bring together Harvard’s leading scholars in the world’s major religions: Christianity, Judaism, Buddhism, Hinduism, and Islam. As a HarvardX MOOC (massive open online course), it was designed to attract an international, multicultural audience.

Moore, a senior lecturer on religious studies and education, a senior fellow at the Center for the Study of World Religions, and director of the Religious Literacy Project, has long been an advocate of “religious literacy,” meaning an understanding of how religion works in its cultural and political contexts. Thus her goal is not to champion one religion over another, but to heighten the study of religion itself. And it’s not often that scholars of each leading religion interact in the real world, much less online.

“The premise is that lack of understanding about religion — or in the term I use, religious illiteracy — is both widespread and dangerous,” she said. “It fuels bigotry and prejudice and hinders cooperative endeavors in local and global arenas. Though a better understanding of religion is not itself going to cure the world’s ills, it can certainly help create bridges and better understanding of our fellow humans. An approach like this isn’t radical within the study of religion. But unfortunately, very few citizens of the world have been exposed to the study of religion as part of their schooling or intellectual life.”

The key to studying religions, Moore believes, is through their scripture. In some ways the class will function like a legal course: When students examine sacred texts like the Bible and Quran, they’ll be noting how they can be differently interpreted. As Moore explains, religions often evolve and change according to the political and cultural climate.

“It becomes an interesting set of questions: What interpretations rise to prominence in a given historical or cultural moment, and which become marginalized? Who gets to interpret, which voices get authority at different times? And how do communities of faith negotiate these differences within their own traditions? For example, you can look at the issue of peace and violence: Which contexts give rise to religious authority promoting peaceful coexistence, and what gives rise to religious expressions of violence?”

Likewise, she plans to explore how issues of gender have evolved over the years. “There is really no uniformity in any tradition about issues related to gender. Instead you see diverse interpretations of the roles of men and women that are represented in what we call the scriptures. That will be a theme running through all of the modules.”

Since the course was designed as a MOOC, and not adapted from a traditional classroom course, it aims to minimize the “talking head” style of teaching in favor of video and interactivity. There are six modules: the first an overview, then one devoted to each religion. New content will be introduced on two days of each week.

And on the third day there will be light — and sound. “That’s when we want students to avail themselves of the discussion,” Moore said. “There’ll be opportunities to post video, be in live contact, and respond to exercises.”

The format also enables the study of religion in the context of place. Hollis Professor of Divinity Karen King, who put together the Christianity module, plans a virtual tour of Jerusalem’s Church of the Holy Sepulchre, which is built on the historic site of Christ’s crucifixion and resurrection. “The focus for me is on teaching students to study religion, to distinguish from how it’s practiced by believers” she said, “not teaching them to follow the religion, but to disperse easy stereotypes and make the religion appropriately interesting and complex.”

As King points out, the Bible is also more fluid than people usually realize. ”Everyone assumes that the Bible is fixed and set, but that isn’t true. Catholics have more books than Protestants do, and you can take into account how it is acculturated in different places. There is a history of Christianity in Ethiopia that is entirely separate from how we think of it.”

The course’s interactivity allows students to contrast different versions of the Bible. “We’ve videotaped a good scene with Karen on camera and dozens of Bibles around her,” project leader Zachary Davis said. Creative animations are now being produced as well. “There’ll be a piece on how to think of different levels of violence. They’re really beautiful and fun animations.”

The modules can be taken individually, but students who take all six will notice some recurring themes. Because King’s module comes first, she’ll be introducing ideas that can be explored in the context of other religions. “We talk, for instance, about how Christians treat difference and diversity,” she said. “I talk about the Christian concept of the heretic, what paganism and Judaism are, and how Christianity has defined them. We look at the story of Sarah and Hagar, which is in the Book of Genesis but is also important to Muslims and Jews, so the same story is used differently. “

As Davis pointed out, a course like this could hardly be better timed. “There is no doubt that there’s strong motivation of peace-building here. So many of our current conflicts are based on poor understanding of religion. So I think it’s fair to say that a better understanding is crucial for the challenges we all face going forward.”

Registration for the course is now open. There will be a panel discussion with the instructors on March 1 at 5:30 p.m. in Andover Hall. The event is free and open to the public. For more information.

World Religions Through Their Scripture

Harvard senior lecturer Diane Moore will be teaching a MOOC through HarvardX, “World Religions Through Their Scripture.” The course, which launches this spring, will bring together Harvard’s leading scholars in the world’s major religions: Christianity, Judaism, Buddhism, Hinduism, and Islam.