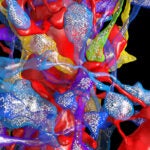 Researchers at MIT’s David H. Koch Institute for Integrative Cancer Research, in collaboration with scientists at the Harvard Stem Cell Institute (HSCI) and several other institutions, have developed an implantable device that in mice shielded insulin-producing beta cells from immune system attack for six months — a substantial proportion of life span.

This bioengineering work by professors Daniel G. Anderson and Robert S. Langer brings the promise of a possible cure for type 1 diabetes within striking distance of phase 1 clinical trials, providing a way to implant in diabetics insulin-producing beta cells developed from stem cells in the laboratory of HSCI co-director Doug Melton.

“This report is an important step forward, in an animal model, because it shows that there may be a way to overcome one of the major hurdles that have stood in the way of a cure for type 1 diabetes,” said Melton, Harvard’s Xander University Professor and a Howard Hughes Medical Institute Investigator. “Now, thanks to the outstanding work of Dan Anderson and Bob Langer at MIT, Gordon Weir at the Joslin Diabetes Center and HSCI, and Dale Greiner at the University of Massachusetts, and our other essential collaborators, we have stem cell-derived beta cells that can provide insulin in a device that appears capable of protecting them from immune attack.”

The work was published online Monday in papers in two journals, Nature Medicine and Nature Biotechnology. Anderson said that he and his colleagues report in the latter paper that when implanted without cells in primates, the new device proved to be “biocompatible for six or eight months, without provoking an inflammatory response” or any other ill effect.

“We are excited by this new technology and are working hard to advance it to the clinic,” said Anderson, the Samuel A. Goldblith Professor of Applied Biology at MIT. “These papers represent seven or eight years of work” at MIT, he said, adding that “we started working with Doug a few years ago when he began producing beta cells from human embryonic stem cells (hESC).”

The Juvenile Diabetes Research Foundation, which along with The Leona M. and Harry B. Helmsley Charitable Trust supported the MIT research, estimates that up to 3 million Americans suffer from type 1 diabetes, an autoimmune disease in which the immune system kills off the insulin-producing beta cells in the pancreas. Daily injections of insulin are the primary treatment, but are only partially successful in regulating patients’ metabolism.

When beta cells are functioning normally, they are part of an exquisitely fine-tuned system, providing precisely the amount of insulin the body needs. Injections cannot come close to mimicking the body’s own insulin-production system, however, and as a result patients can develop complications ranging from blindness to heart disease to loss of limbs. Type 1 diabetes causes or contributes to hundreds of thousands of deaths annually.

It is believed that if implanted beta cells could be shielded from immune attack, and would respond to the body’s own signals for insulin, they would be likely to eliminate most, or even all, the complications of the disease, and would, in effect, serve as a cure.

Some patients with type 2 diabetes, which has reached epidemic proportions in the United States and around the globe, also become insulin dependent, and might benefit from the implantation of stem cell-derived beta cells.