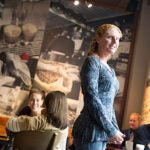 Java in the genes

Harvard stem cell researchers announced today that they have made a giant leap forward in the quest to find a truly effective treatment for type 1 diabetes, a disease that affects an estimated 3 million Americans at a cost of about $15 billion annually.

With human embryonic stem cells as a starting point, the scientists were for the first time able to produce, in the kind of massive quantities needed for cell transplantation and pharmaceutical purposes, human insulin-producing beta cells equivalent in most every way to normally functioning beta cells.

Doug Melton, who led the work, said he hopes to have human transplantation trials using the cells under way within a few years. Twenty-three years ago, when his infant son Sam was diagnosed with type 1 diabetes, Melton dedicated his career to finding a cure for the disease.

“We are now just one preclinical step away from the finish line,” said Melton, whose daughter Emma also has type 1 diabetes.

A report on the new work is being published today by the journal Cell.

Felicia W. Pagliuca, Jeff Millman, and Mads Gurtler of Melton’s lab are co-first authors on the Cell paper. The research group and paper authors include a Harvard undergraduate.

“You never know for sure that something like this is going to work until you’ve tested it numerous ways,” said Melton, Harvard’s Xander University Professor and a Howard Hughes Medical Institute investigator. “We’ve given these cells three separate challenges with glucose in mice, and they’ve responded appropriately; that was really exciting.

“It was gratifying to know that we could do something that we always thought was possible,” he continued, “but many people felt it wouldn’t work. If we had shown this was not possible, then I would have had to give up on this whole approach. Now I’m really energized.”

“Doug Melton and his colleagues continue to push stem cell science forward with their extraordinary work. This accomplishment is something none of us could have predicted 10 years ago, and I am excited to see where it will lead.” — President Drew Faust

Elaine Fuchs, the Rebecca C. Lancefield Professor at Rockefeller University, and a Howard Hughes Medical Institute investigator who is not involved in the work, hailed it as “one of the most important advances to date in the stem cell field, and I join the many people throughout the world in applauding my colleague for this remarkable achievement.

“For decades, researchers have tried to generate human pancreatic beta cells that could be cultured and passaged long-term under conditions where they produce insulin. Melton and his colleagues have now overcome this hurdle and opened the door for drug discovery and transplantation therapy in diabetes,” Fuchs said.

Jose Oberholzer, associate professor of surgery, endocrinology, and diabetes, as well as bioengineering, at the University of Illinois at Chicago and director of the islet and pancreas transplant program and the chief of the Division of Transplantation, said the work “will leave a dent in the history of diabetes. Doug Melton has put in a lifetime of hard work in finding a way of generating human islet cells in vitro. He made it. This is a phenomenal accomplishment.”

Melton, who also is co-scientific director of the Harvard Stem Cell Institute and the University’s Department of Stem Cell and Regenerative Biology — both of which were created more than a decade after he began his quest — said that when he told his son and daughter, they were surprisingly calm. “I think like all kids, they always assumed that if I said I’d do this, I’d do it,” he said with a self-deprecating grin.

Type 1 diabetes is an autoimmune metabolic condition in which the body kills off all the pancreatic beta cells that produce the insulin needed for glucose regulation in the body. Thus the final preclinical step in the development of a treatment involves protecting from immune system attack the approximately 150 million cells that would have to be transplanted into each patient being treated. Melton is collaborating to develop an implantation device to protect the cells with Daniel G. Anderson, the Samuel A. Goldblith Professor of Applied Biology, associate professor in the department of chemical engineering, the Institute of Medical Engineering and Science, and the Koch Institute at MIT.

Melton said that the device Anderson and his colleagues at Massachusetts Institute of Technology are testing has thus far protected beta cells implanted in mice from immune attack for many months. “They are still producing insulin,” Melton said.

Cell transplantation as a treatment for diabetes is still essentially experimental, uses cells from cadavers, requires the use of powerful immunosuppressive drugs, and has been available to only a very small number of patients.

Anderson said the new work by Melton’s lab is “an incredibly important advance for diabetes. There is no question that ability to generate glucose-responsive, human beta cells through controlled differentiation of stem cells will accelerate the development of new therapeutics. In particular, this advance opens the doors to an essentially limitless supply of tissue for diabetic patients awaiting cell therapy.”

Richard A. Insel, chief scientific officer at JDRF (Juvenile Diabetes Research Foundation), which helps fund Melton’s work, said “JDRF is thrilled with this advancement toward large-scale production of mature, functional human beta cells by Dr. Melton and his team. This significant accomplishment has the potential to serve as a cell source for islet replacement in people with type 1 diabetes and may provide a resource for discovery of beta cell therapies that promote survival or regeneration of beta cells and development of screening biomarkers to monitor beta cell health and survival to guide therapeutic strategies for all stages of the disease.”

Eliot Brenner, program director of the Helmsley Charitable Trust’s type 1 diabetes program, said, “The trust is pleased to have supported Dr. Melton and his team in this breakthrough. The ability to create insulin-producing cells not only has significant clinical potential, but it opens an important new path for researchers to understand and develop novel treatments for type 1 diabetes.”

Melton expressed gratitude to both JDRF and the Helmsley Charitable Trust, saying, “Their support has been, and continues to be, essential. I also need to thank [research supporters] Howard and Stella Heffron, whose faith in our vision got this work under way, and helped to get us where we are today.”

While diabetics can keep their glucose metabolism largely under control by injecting insulin multiple times a day, that does not provide the kind of exquisite fine-tuning necessary to properly control metabolism, and that lack of control can lead to devastating complications from blindness to loss of limbs.

About 10 percent of the more than 26 million Americans living with type 2 diabetes are dependent on insulin injections, and presumably would be candidates for beta cell transplants, Melton said.

“There have been previous reports of other labs deriving beta cell types from stem cells. No other group has produced mature beta cells as suitable for use in patients,” he said. “The biggest hurdle has been to get to glucose sensing, insulin-secreting beta cells, and that’s what our group has done.”

Harvard President Drew Faust noted, “When the Harvard Stem Cell Institute was created in 2004, the University ventured into uncharted and, some thought, untenable terrain. Today, the possibility of growing in knowledge and in wisdom has given way to the promise of improving health and changing lives. Doug Melton and his colleagues continue to push stem cell science forward with their extraordinary work. This accomplishment is something none of us could have predicted 10 years ago, and I am excited to see where it all leads.”

In addition to the institutions and individual cited above, the work was funded by the Harvard Stem Cell Institute, the National Institutes of Health, and the JPB Foundation.