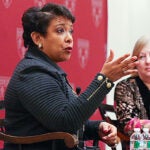 The decision by General Electric, one of the world’s largest companies, to move its corporate headquarters to Boston came in part, the company’s chief executive said last week, because of the city’s strength as a bastion of higher education and innovative research.

GE, the $130 billion conglomerate whose products include aircraft engines, household appliances, and oil and gas production equipment, has begun transforming itself into a digital industrial company. In 2014 it moved its life sciences headquarters to Marlborough, and last year announced that its energy services start-up would be headquartered in Boston.

GE chairman and CEO Jeff Immelt said the move from Fairfield, Conn., to Boston, which he called “a dynamic and creative city,” makes sense, in part because of the intellectual capital fueled by the region’s many tech-savvy schools, including Harvard, Massachusetts Institute of Technology, Boston University, and Northeastern University.

“We want to be at the center of an ecosystem that shares our aspirations,” Immelt said in the press release about the move. “Greater Boston is home to 55 colleges and universities. Massachusetts spends more in research and development than any other region in the world, and Boston attracts a diverse, technologically fluent workforce focused on solving problems in the world.”

The company plans to settle its headquarters in Boston’s Seaport district by 2018. Employees will move into a temporary location nearby beginning this summer. The move is expected to bring 800 new jobs to Boston, 200 in corporate positions, and 600 split between digital industrial managers, designers, and developers.

Professor Claudia Goldin, Henry Lee Professor of Economics at Harvard, said that though the number of arriving employees may seem low to start, the move’s long-term impact will be a boon.

“It’s a win-win situation for both Boston and GE,” she said. “It can’t hurt.”

“The academic-industry nexus is crucial to our innovation ecosystem, and having GE in our backyard will be an enormous boon to Harvard and to the region,” said Dean Francis J. Doyle III of the Harvard John A. Paulson School of Engineering and Applied Sciences (SEAS), and the John A. & Elizabeth S. Armstrong Professor of Engineering & Applied Science.

Jodi Goldstein, the Bruce and Bridgitt Evans Managing Director of the Harvard Innovation Lab (i-lab), who started her career at GE in the 1990s, agreed. She said the company’s move to Boston reinforces its commitment to innovation and evolution.

“Boston and GE have mutual aspirations,” she said. “GE is interested in moving into the digital age and continuing to evolve its products and services. This aligns well with the strength of Boston in life sciences, robotics, IoT [Internet of Things], and software. There is no other ecosystem in the world with the tremendous human capital that comes from the high concentration of universities, science, and research institutions.”

Goldstein hopes there will be partnership opportunities between i-lab startups and GE and other corporations. Since it was founded in 2011, 600 companies have been incubated within the i-lab.

In his statement, Massachusetts Gov. Charlie Baker said he welcomed the company’s “decision to take advantage of the unique resources that our state has to offer, from our innovative economy to top universities.” Boston Mayor Marty Walsh said General Electric’s “choice to move to Boston is the result of the city’s willingness and excitement to work creatively and collaboratively to bring positive activity to our local economy and continue to grow our industries.”