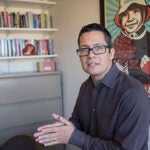 Struggle in the shadows

When Mexican President Vicente Fox publicly opened a vast archive of confidential government files in 2000, investigative journalist Jacinto Rodriguez was one of the first in line to enter the former prison that houses the National Archive. There, inside the cells of what was once known as the “Black Palace,” Rodriguez spent more than a decade poring over thousands of documents that revealed dark secrets of Mexico’s authoritarian past and threw light onto the 71-year, uninterrupted reign of the Institutional Revolutionary Party (PRI).

The archives provided insights into Mexico’s unofficial past, said Rodriguez, one of the founders of the independent political magazine Emeequis.

“It is like a window into a story of Mexico that stands in stark contrast to the official story,” said Rodriguez. “It’s a story engulfed in shadows that explains the long and invisible tyranny led by the party that ruled Mexico since 1929.”

Until 2000, the PRI maintained what some critics called “the perfect dictatorship” because it kept its democratic façade, but behind the scenes ordered the torture and killings of political opponents and exerted an ominous control on the media, church, judiciary, and other institutions.

Rodriguez’s research in the Mexican archives led him to write three books on the murky practices the PRI used to remain in power with little opposition.

In “The Secret Payrolls of Government,” he wrote about Mexico’s dirty war against left-wing guerrillas in the 1970s. He had access to documents that detailed a bureaucracy of repression such as intelligence files describing torture sessions, interrogation manuals, and official accounts of how suspects allegedly were dropped alive into the sea from helicopters.

For his second book, “The Other Secret War,” he used letters and confidential documents that showed not only how the government controlled most of the Mexican media to stifle criticism, but how journalists and media outlet owners were often bought off in exchange for their support.

“The government controlled the media, but there was collusion too,” said Rodriguez.

In “1968: All the Culprits,” Rodriguez provided a detailed account of the Tlatelolco massacre, in which military and police forces killed about 50 students who were protesting against the government in a public square in Mexico City. Using files written by security personnel, Rodriguez said he documented how government officials planned, carried out, and covered up the massacre.

Now, nearly 3,000 miles away, at Harvard’s Houghton Library, Rodriguez carries on his quest of untangling the riddles of Mexico’s past. Among other special collections, the Houghton Library holds rare manuscripts and official documents from Latin-American governments.

For his fourth book, Rodriguez, who is now a Madero/Fundación México Visiting Scholar at the David Rockefeller Center for Latin American Studies, is researching the relationship between intellectuals and power in Mexico in the 1960s and ’70s.

Rodriguez believes the role of intellectuals, academics, and scholars was key to helping keep the PRI in power. He said that documents, letters, and payrolls he has found in the archives show that intellectuals were spied on, neutralized, coopted, and bought off through patronage and corruption.

“The government not only wanted to eliminate criticism,” said Rodriguez. “It also needed allies, people who could legitimize it.”

It also wanted to keep tabs on those whom it deemed suspicious due to their leftist sympathies. The Mexican intelligence service kept files on the activities of noted Latin-American writers such as Gabriel García Márquez, Octavio Paz, and Julio Cortázar, said Rodriguez.

Rodriguez got a scoop when he found a confidential document in the Mexican archives that summed up the government’s designs to control public opinion. Political propaganda, said the file, would help realize “an invisible tyranny that has the front of a democratic government.”

“More than the perfect dictatorship,” said Rodriguez. “That’s what the PRI government was, an invisible tyranny.”

Struck by this finding, Rodriguez called his blog La Tiranía Invisible (The Invisible Tyranny, in Spanish), where he posts discoveries from his research.

To his surprise, Rodriguez found at Houghton letters by Paz, the Mexican poet, diplomat, and Nobel Prize winner in literature, who publicly broke with the government after the Tlatelolco massacre.

Rodriguez plans to publish his book next year, and although he said there will be some exposés, he hopes it won’t be an indictment of those who sided with the government.

He also hopes to go back to the Mexican archives, which have been off limits to the public since early this year. The election of Enrique Peña Nieto in 2012 marked PRI’s return to power after a 12-year gap.

“It’s a return to silence and to the fear of memory,” said Rodriguez. “Archives can help heal the wounds of the past. They cast light on the past and help us understand both the past and the present.”