The gift of Kuumba 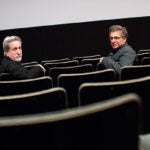 In its 45th year of a celebrated tradition

In the yearly cycle of a Harvard student, before the comfort of the festive year-end season, comes the stress of finals season. This weekend, as the community braces to clear that last hurdle, the Kuumba Singers of Harvard College offer the perfect antidote: their annual Christmas Concerts.

Christmas songs, gospel, spirituals, spoken word and dance will fill Harvard’s Memorial Church in this year’s edition, the 45th of a celebrated tradition by the oldest existing black organization on campus.

Named for the Swahili word that means “to create,” Kuumba dates to 1970, when a group of black undergraduate students formed on the backdrop of “a time when things across campus, and the nation, were particularly difficult for people of color,” according to the group’s president, LeShae Henderson ’16.

“They created a space where they felt valued and appreciated, and could practice their cultural traditions, which at that time didn’t necessarily exist at Harvard,” she said. “Today, 45 years later, it’s still a safe space for black students on campus.”

Being a part of Kuumba was a huge draw for Henderson when deciding where to pursue her education. Three and half years later, she described the group as a second family — one that has not only been supportive to her as a Harvard student, but as a person of color living through a tumultuous period in the history of race relations nationwide.

The concert, she said, is a gift to the community that falls in line with her interpretation of the group’s mission. “We celebrate creativity and spirituality, and do what we can with what we have, to leave a space better than we found it.”