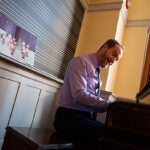 This December, as tree lot attendants load the fragrant, streamlined shapes of netted firs and spruces onto auto roof-racks and count out change with fingers numbed by cold, it would be well to remember that 1996 is the 200th birthday of the man who brought the tradition of the decorated Christmas tree to New England.

That man was Charles Follen (1796-1840), and besides introducing the Christmas tree at a party at his Cambridge home in 1832, he lived an eventful life filled with varied accomplishments (including a 10-year stint as a Harvard professor) and marked by a passionate devotion to the cause of liberty.

“Follen has left us a legacy of social action based on the principle of freedom. It’s a principle that we continue to test ourselves against,” said Lucinda Duncan, minister of the Follen Community Church of East Lexington, the church that Follen founded in 1839.

Born in Darmstadt, Germany, Follen came of age under the influence of the Napoleonic Wars and their repressive aftermath. He and his generation saw French domination come to an end, only to be replaced by a resumption of aristocratic rule instituted by the Congress of Vienna.

Idealistic youths like Follen found the situation intolerable and expressed their displeasure by organizing themselves into revolutionary student organizations and agitating for reform. When the movement split into two factions, Follen, a very vocal student leader, remained solidly with the more radical group, calling for the overthrow of the government, by violent means if necessary.

When a conservative author named Kotzebue was assassinated, Follen was twice arrested and tried for conspiracy in the murder, but the authorities could find no evidence against him. However, fearful for his liberty and his life, Follen thought it best to flee the country. He went to Basel, then Paris, and finally came to America.

After less than a year spent learning English and “networking,” Follen landed a job at Harvard in 1825 as the College’s first German teacher. He doubled as the instructor of a subject that was then coming into vogue, gymnastics. Later, he added history and ethics to this busy teaching schedule.

Follen found the freedom of American society immensely refreshing and flourished in his adopted country. In 1828 he married Eliza Lee Cabot, one of the brahmanic Boston Cabots, who, in a famous quip, are said to talk only to God.

Through Eliza, he got to know some of Boston’s most celebrated figures, including William Ellery Channing, a leading Unitarian minister. Under Channing’s influence, Follen began studying for the ministry and soon embarked on a preaching career in addition to his duties at Harvard.

The year 1830 was a significant one for Follen. It was the year he became a naturalized citizen of the United States and the year his son, Charles Christopher Follen, was born. This young man’s arrival was probably the chief factor leading to Follen’s introduction of the Christmas tree.

The event took place in December 1832. That is the date of a description by Harriet Martineau, an English Unitarian and journalist who was visiting Boston at the time.

Follen, remembering the German Christmases of his youth and wishing to recreate the magic and beauty of a decorated tree for his young son, went out into the woods near his home and cut down a small fir.

The tree was set in a tub and its branches hung with small dolls, gilded eggshells, and paper cornucopias filled with candied fruit. The tree was illuminated with numerous candles.

Martineau describes the unveiling of the tree at the Follens’ Christmas party: “It really looked beautiful; the room seemed in a blaze, and the ornaments were so well hung on that no accident happened, except that one doll’s petticoat caught fire. There was a sponge tied to the end of a stick to put out any supernumerary blaze, and no harm ensued. I mounted the steps behind the tree to see the effect of opening the doors. It was delightful. The children poured in, but in a moment every voice was hushed. Their faces were upturned to the blaze, all eyes wide open, all lips parted, all steps arrested.”

Follen was not the first person in America to have a Christmas tree. Decorated trees had been seen in Pennsylvania in the 1820s, and there are reports that Hessian soldiers fighting for the British during the Revolution set up Christmas trees in their encampments. But there is good evidence that Follen was the first person to bring the decorated tree to New England and, after he set the example, the custom spread. The year the National Christmas Tree Association projects sales of 37 million trees. 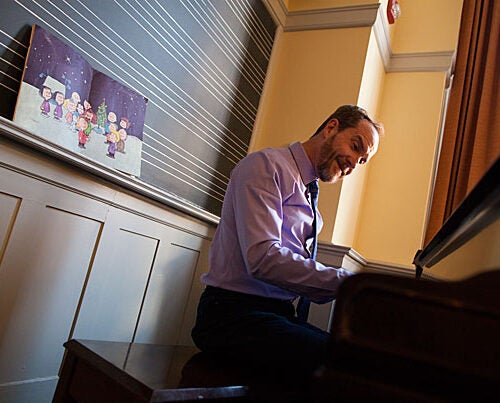 To this day, the Follen Community Church commemorates his introduction of the Christmas tree by lighting a tree on its front lawn as well as selling Christmas trees in the lot across the street to raise funds for church programs.

And according to Duncan, the church also strives to remain true to Follen’s example as a social activist, an example that showed no sign of diminishing as Follen matured. As an American, Follen took up the fight against slavery as ardently as he had once fought against the injustices of European despots.

His uncompromising abolitionist principles once lost him a job as pastor of All Souls Church in New York City, and his outspoken stand against slavery at a time when abolition was still highly controversial, even in Massachusetts, may have ended his teaching career. Harvard did not renew his professorship in 1835, but did offer to employ him as a German instructor, at a reduced salary. Supporters, including his wife and the abolitionist poet John Greenleaf Whittier, later said that it was his outspoken views that cost him his Harvard position.

Relieved of his teaching duties, Follen became a free agent. He wrote, preached, and lectured widely, traveling as far afield as Chicago. In 1839, he received an invitation to preach to a small congregation in East Lexington.

Follen accepted, but left after a short while to take a more lucrative position as tutor to a family in Watertown. To fill his position, he recommended a young renegade Unitarian minister named Ralph Waldo Emerson.

Follen returned when the congregation came up with the money to hire him full time and to build its own church. He designed the octagonal church which still stands, laid out so that the minister would not be elevated above his parishioners.

Tragically, Follen did not live to preach in the church which bears his name. He was killed in 1840 at the age of 44 in a fire on board the steamship Lexington while crossing Long Island Sound.

“He was really a man who left a mark on this congregation,” said Duncan. “He had a vision of a free Christian church where all people could come and speak their minds. It was an idea that was way ahead of its time.”