First admissions to Class of ’20

Her high school football team was playing in the 2014 state finals, but Audrey Maghiro didn’t get a ticket to the game. She wasn’t sure she’d be in the mood to go because the day before the game she expected to learn whether she’d been accepted to Harvard College under the Early Action program.

“I knew this is where I wanted to go,” she says now. “And I didn’t want to wait until April to realize this dream wasn’t supposed to happen.”

Audrey said her mother got her two cards. One said, “Congratulations.” The other said, “It’s OK.”

“She wasn’t there when I opened the email from Harvard,” Maghiro said. “The email told me I had something updated to my account. I clicked the button but closed my eyes and turned around because I didn’t want to see it. Then I just saw ‘C’ and started screaming.”

The “C” started the word “congratulations.” Just as Maghiro, now a member of the Class of 2019, experienced last year, 918 students opened similar emails this year and learned they had been accepted for admission under the Early Action program.

Interest in early decision is on the rise. The number of students applying to the College’s Early Action program has grown in each of the past five years. This year’s Early Action applications totaled 6,173, compared with 5,918 last year and 4,228 five years ago. But the number of students whom Harvard has admitted early dropped again, for the third year in a row. This year’s early admissions of 918 compare with 977 last year and 992 the year before.

“As always, a significant nucleus of the next year’s class has been admitted early, and we recognize this is an important option for a wide range of students,” said William R. Fitzsimmons, dean of admissions and financial aid. “But we are committed to preserving the principle that those who apply under regular action are afforded the same opportunity for admission as those who apply early.” A record 37,307 students applied for regular admission last year.

“We work hard through many different channels to reach outstanding students in every corner of the nation and around the world. We want to be certain that students from all backgrounds and different life experiences understand how to apply to Harvard, whether through Early Action or regular admission,” said Fitzsimmons.

“The undergraduates who help us in these programs are crucial to our success,” said Roger Banks, senior associate director of admissions. “Throughout the year, they reach out to prospective students in every way possible — by email, telephone, personal meetings — to share their experiences at Harvard and answer questions from students unsure of what to expect and eager to hear from someone who’s really experienced Harvard College life.”

The interaction with current students can help ease the concerns of prospective students, especially those with little exposure to what college is all about, including students who are the first in their families to attend college. 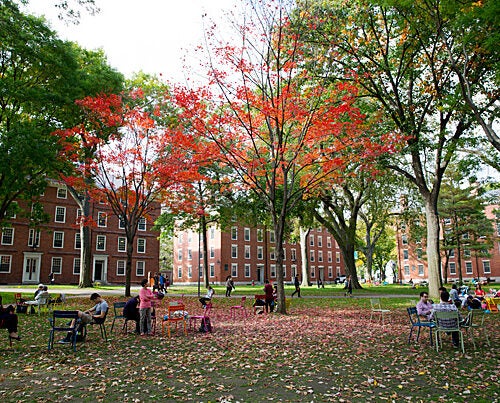 Range of backgrounds among prospective students

For admitted students, Harvard’s leading Financial Aid Initiative is likely to play a key role in their decision to attend. The program started more than a decade ago and has been expanded and enhanced under the leadership of Harvard President Drew Faust and Edgerley Family Dean of the Faculty of Arts and Sciences Michael D. Smith.

Over that time, Harvard has awarded undergraduates $1.4 billion in financial aid. Even when the economic crash of 2008-’09 forced major budget cuts across the University, Harvard protected and increased financial aid, since the downturn left families and students needing more help.

Under the Financial Aid Initiative, one in five undergraduate families pays nothing for tuition, room, and board because their annual income is $65,000 or less. At higher income levels, families pay between zero and 10 percent of their annual income for tuition, room, and board (for example, $12,000 for a family with $120,000 a year in income and typical assets). This 10 percent limit holds for families earning up to $150,000 a year. Need-based aid is also available to families with incomes of more than $150,000 a year. Families with significant assets in all income categories are asked to contribute more.

“A Harvard education costs the same or less than a state school for 90 percent of American families, based on their income and because of Harvard’s financial aid,” said Sally C. Donahue, Griffin Director of Financial Aid. “And every Harvard undergraduate can graduate debt-free because our financial aid is loan-free, providing only grants.”

Harvard pays for more than tuition, room, and board even when classes are not in session. Harvard financial aid helps students pay for books, travel home, attend events, performances, activities, and more, so that every student can engage deeply in the Harvard experience.

“Harvard’s Net Price Calculator, a simple one-page application available on both the admissions and financial aid websites, provides families with an estimate of their eligibility for assistance under Harvard’s generous, need-based financial aid program,” said Donahue.

In addition to the 918 admitted students, 4,673 students were deferred and will be considered again in the regular action admissions, while 464 students were denied, 12 withdrew, and 106 submitted incomplete applications. The regular admissions process concludes in March, with notification to students on March 31.

Faculty, staff, undergraduate recruiters, and alumni will use personal notes, phone calls, emails, regular mailings, and social media to reach out to admitted students with information about Harvard. Many Harvard clubs will host information sessions during the winter holidays and in April. All admitted students will be invited to visit Cambridge on April 16-18 for a comprehensive program that enables them to experience life at Harvard firsthand.

Maghiro’s advice to students accepted under the Early Action program: “You’ve gotten in! Enjoy your senior year of high school.”