Civil rights, then and now 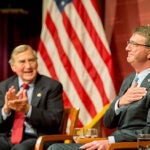 Carter: Islamic State will be defeated

Through the prism of St. Louis and Ferguson, panel discusses how the movement has evolved, and where it endures

Their tones and tactics may vary, but African-American civil rights activists from different generations share plenty of common ground in their efforts to confront continuing racism across American society, speakers told a Harvard forum.

That sentiment was an overriding theme in the panel discussion on changing dynamics in the fight for black equality held Thursday at CGIS South, and presented by the Charles Warren Center for Studies in American History with support from the Hiphop Archive & Research Institute.

“We’ve got to air out the differences — that’s important. But our similarities in this case are a lot more important than our differences,” said panelist George Lipsitz, a professor in the Department of Black Studies at the University of California at Santa Barbara.

The discussion among three St. Louis civil rights leaders and two professors came amid surging protests nationwide against police killings of unarmed black people. Although focused on the half-century struggle for black rights in that racially divided city, the forum also touched on broader themes in the Civil Rights Movement, including some generational tensions over the more aggressive approach to change taken by some younger leaders.

Among the panelists was the rapper Tef Poe, who gained recognition last year for his widely publicized comment that this “is not your father’s Civil Rights Movement.”

A co-founder of HandsUpUnited, a protest group organized after Michael Brown was fatally shot by a policeman in Ferguson, Mo., Poe said his comment was aimed at the firm resistance the black community needed to show in response police violence.

“All too often, we’ve been told that change happens in increments … That’s fine,” Poe said. “But we are in the midst of what we are describing as a war … I can’t allow you to come in our neighborhood with a full militarized force.”

Jamala Rogers, a veteran activist who was also involved in the Ferguson protests, said activists from different generations were socialized differently.

“We know there are particularities about how we see the world and how we see the struggle,” said Rogers, whose past leadership work has included co-founding the Organization for Black Struggle. She said it was important to air those differences and for younger activists to learn from the movement’s past strengths and weaknesses.

“And we need not to be devaluing … the worth of young people,” Rogers added. “They bring a lot of energy.”

Lipsitz said there were benefits to having “different ways of solving problems.” He said each generation of black activists has in common its participation in a unique centuries-long struggle.

Percy Green II, a civil rights activist for more than half a century who has been arrested more than 100 times during protests, said civil disobedience remains an important tool to sustaining the movement.

Poe said that those who want to work for change need to be serious about their commitment. “It’s not easy. You will have to sacrifice,” he said. “But if you really believe this is life or death, what are you going to do about it?”

Robin D.G. Kelley, a professor of history at the University of California, Los Angeles, praised Rogers and others who kept the Civil Rights Movement going during the decades when it appeared to have lost steam. He said such recognition avoids the misconception that “every movement, every eruption is a complete break.”

Kelley also saluted those behind the Ferguson protests, observing, “The sustained level of resistance was so high it became almost ground zero for the struggles around the country, if not the world.”