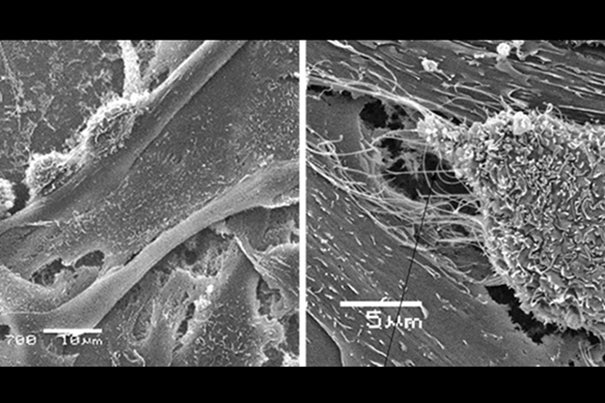 Scientists find neurotransmitter that ties in with disorder’s behavior

In a discovery that could offer valuable insights into understanding, diagnosing, and even treating autism, Harvard scientists for the first time have linked a specific neurotransmitter in the brain with autistic behavior.

Using a visual test that prompts different reactions in autistic and normal brains, a research team led by Caroline Robertson, a junior fellow of the Harvard Society of Fellows, was able to show that those differences were associated with a breakdown in the signaling pathway used by GABA, one of the brain’s chief inhibitory neurotransmitters. The study is described in a Dec. 17 paper in the journal Current Biology.

“This is the first time, in humans, that a neurotransmitter in the brain has been linked to autistic behavior — full stop,” Robertson said. “This theory that the GABA signaling pathway plays a role in autism has been shown in animal models, but until now we never had evidence for it actually causing autistic differences in humans.”

Though it may not lead directly to autism treatments, Robertson said the finding offers invaluable insight into the disorder and the role that neurotransmitters such as GABA may play in it. The discovery also suggests that similar visual tests could be used to screen younger children for autism, allowing parents and clinicians to intervene sooner.

Though long believed to play a role in autism — GABA has been widely studied in animal models — evidence supporting GABA’s role in the disorder in humans has been elusive.

“Autism is often described as a disorder in which all the sensory input comes flooding in at once. So the idea that an inhibitory neurotransmitter was important fit with the clinical observations,” Robertson said. “In addition, people with autism often have seizures — there is a 20 to 25 percent comorbidity between autism and epilepsy — and we think seizures are runaway excitation in the brain.”

To find that evidence, Robertson and colleagues went searching for an easily replicable test that produced consistently different results in people with and without autism, and found it in what visual neuroscientists call binocular rivalry.

Normally, she said, the brain is presented with two slightly different images — one from each eye — that it averages to create the single image we see. The binocular-rivalry test, however, forces each eye to take in very different images, with surprising results.

“The end result is that one image is just suppressed entirely from visual awareness for a short period,” Robertson said. “So if I show you a picture of a horse and an apple, the horse will entirely go away, and you will just see the apple. Eventually, though, the neurons that are forcing that inhibitory signal get tired, and it will switch until you only see the horse. As that process repeats, the two images will rock back and forth.”

In earlier studies, Robertson and colleagues showed that while the same process does occur in the autistic brain, the oscillation between images can take significantly longer.

Using magnetic resonance spectroscopy, a brain-imaging technique that can measure the levels of certain neurotransmitters in the brain, researchers found that while those with autism did show normal levels of GABA, the relationship between GABA and visual perception was far lower than expected.

“What we think we’re seeing is evidence of a deficit in the GABA-ergic signaling pathway,” Robertson said. “It’s not that there’s no GABA in the brain … it’s that there’s some step along that pathway that’s broken.”

Fixing that pathway is easier said than done.

“It’s very diverse,” Robertson said. “There are two forms of GABA receptors, A and B, and the GABA A receptor can take multiple forms. We may be able to use this test to look at the effectiveness of drugs to give us a better idea about which of those receptors isn’t working properly. But it’s very complex.

“If these findings hold true in children as well as adults … right now we cannot diagnose autism in children who cannot speak, but that’s when early intervention would be most effective,” she continued. “But before children can talk, they can see, so we may be able to use this type of visual task to screen children and see if there’s something imbalanced in their brains.”

Robertson warned, however, that understanding the signaling pathway for GABA won’t be a cure-all for autism.

“I’m excited about this study, but there are many other molecules in the brain, and many of them may be associated with autism in some form,” she said. “We were looking at the GABA story, but we’re not done screening the autistic brain for other possible pathways that may play a role. But this is one, and we feel good about this one.