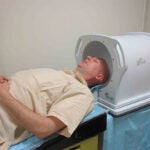 Harvard scientists have identified a method to help reduce autism symptoms in mice, a finding that could one day lead to new insight into how the disorder affects the brains of humans.

In a July 31 study described in Neuron, Takao K. Hensch, a professor of molecular and cellular biology and of neurology, and Nadine Gogolla, now a group leader at the Max Planck Institute of Neurobiology in Germany, found that boosting inhibitory neurotransmission early in brain development could reverse deficits in sensory integration associated with autismlike symptoms.

“Despite ample evidence in humans that the insula [a brain region] is deeply involved in hallmarks of the social brain, such as empathy, pain, and urges, this is the first attempt to characterize its development in an experimentally tractable model,” said Hensch, who also serves as the director of the NIMH Conte Center at Harvard, which investigates the developmental origins of mental illness.

Hensch’s team focused on the insular cortex in the brains of a particular inbred type of mouse, called BTBR, that is often used as a model of idiopathic autism. The researchers found that the parvalbumin basket cells, a group of inhibitory interneurons already suspected in autism and other psychiatric disorders, showed decreased expression of inhibitory marker proteins and electrophysiological activity.

Treating newborn mice with a benzodiazepine shortly after birth, the team strengthened inhibitory neurotransmission and prevented deficits in multisensory integration. When administered to adult mice, however, the same treatment proved ineffective.

The finding suggests there may be a critical period for maturation of multisensory integration in the insula, which is regulated by excitatory-inhibitory balance and crucial for healthy social development. The authors noted that the critical period overlaps with the emergence of rodent social play behavior, which relies on vocal and forepaw interactions.

Further study of the critical period may help researchers gain a better understanding of the core pathology in autism and other psychiatric disorders where multisensory integration is affected, and could ultimately lead to the development of novel therapies or biomarkers for early diagnosis.

Intriguingly, the researchers said, the rescue of multisensory integration with drug treatment in young BTBR mice correlates with an improvement in repetitive grooming behavior, an established phenotype in many mouse models of autism.

Since the BTBR mice are hyper-responsive to sound but show a weaker insula response when sound and touch stimuli are presented together, the excessive grooming behavior — long viewed as pathologic — could actually be an adaptive response. Hensch hopes to study whether the voluntary tactile stimulation afforded by self-grooming is being used to dampen the heightened insular activity caused by undesired visceral or auditory input, and whether these observations can provide new insight into repetitive behaviors and sensory processing abnormalities in human autism.