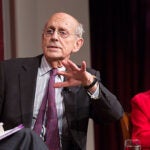 Ongoing racial discrimination and institutional failures to dampen such abuses are roiling many college campuses, amid the larger national conversation spurred by the Black Lives Matter movement. In the swirl, few writers have so artfully articulated their era as the influential, best-selling author Ta-Nehisi Coates.

The national correspondent for The Atlantic and a 2015 MacArthur Foundation fellowship recipient, Coates’ article “The Case for Reparations” and his new book, “Between the World and Me,” are deeply powerful exhortations on the present-day manifestations of the nation’s fraught racial history.

Appearing before an electrified crowd at Harvard Kennedy School (HKS) Wednesday evening for a discussion about race and criminality, Coates was joined by moderator Bruce Western, director of the Malcolm Wiener Center for Social Policy at HKS; sociologist William Julius Wilson, the Lewis P. and Linda L. Geyser University Professor at Harvard; and Kathryn Edin, a former professor at HKS and now Distinguished Bloomberg Professor of Sociology and Public Health at Johns Hopkins University.

Coates argued that America’s practice of disproportionately criminalizing and incarcerating African-American men is a direct extension of our history of using the criminal justice system to address social problems, and of whites sometimes labeling black people as criminals in order to justify limiting their rights and “plundering” their labor.

“I believe that as much as George Washington matters, as much as the American Revolution matters, the heritage of telling ourselves certain things about black people also matters,” said Coates.

The country has a long history of defining black people, especially those who sought freedom, as criminals. For a century after Emancipation, white Americans mounted a “terrorist campaign” against blacks through lynching and other violence that was somehow justified by this “notion of criminality,” he said.

“It was common when African-Americans made demands for political rights to point to criminality as a response,” he said, noting that in their day, Frederick Douglass, Harriet Tubman, and even Martin Luther King Jr. often were seen not as heroes, but as troublemakers. King “was treated by the highest powers in this country like a criminal, and I think that heritage has some sort of effect” on why the rate of incarceration of black men is so high today, Coates said.

It’s not enough simply to free large numbers of non-violent prisoners in order to roll back the nation’s incarceration rate to the levels of the 1970s, as the Obama administration announced earlier this year it intends to do, said Coates. There needs to be a coherent plan to assist with their transition.

Changing the dynamics between blacks and whites will demand that people revise their self-definition. “I think it requires a critical mass of people in this country to give up a real interest” in their identity and standing in relation to one another, said Coates.

Coates said he’s been “shocked” at the reception to his book, which has been critically acclaimed and named a National Book Award finalist. The book recalls his upbringing in West Baltimore, where violence or the threat of violence was a constant fact of life, and appearing tough or “hard” was a logical response.

“One of the arguments I made in ‘Between the World and Me’ is that much of what people look at in black America and construe as anger is, in fact, deep, deep fear,” he said.

As a writer, Coates said he feels he has an obligation not to argue for what could realistically happen in the near future, but for what needs to happen over the long term, and hope that it moves the needle more substantively.

Asked to weigh in on the Yale University protest over racial discrimination and free speech, Coates said he didn’t feel sufficiently informed to render an opinion. But he characterized a debate there over offensive Halloween costumes and emails as undoubtedly a symptom of far deeper issues.

“I think, in these cases, we’re like five questions too late,” he said. “By the time that has become important, something else has really, really gone wrong.”