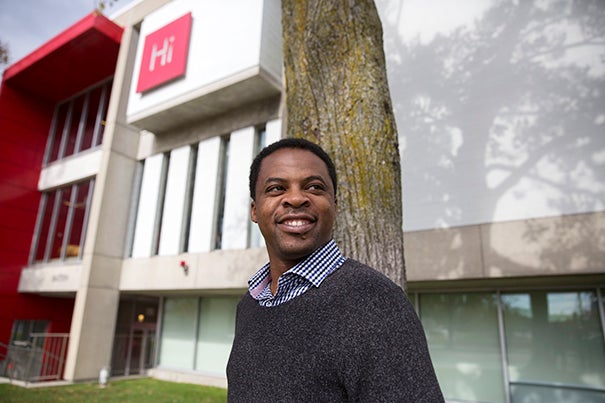 Coffee with a cause

Harvard students who have served in the armed forces represent a diverse range of backgrounds and experience, but all have one thing in common: a profound dedication to serving the nation, under the most perilous of circumstances.

Fifteen active-duty or veteran soldiers have matriculated at Harvard Law School (HLS) this year. Among those who have shared their perspectives on their service and their experiences at Harvard is Anne Stark. In honor of Veterans Day, HLS profiled three of its students, including Stark. To read additional profiles, visit the HLS website.

During her 10 months as company commander in a U.S. Army attack reconnaissance battalion in a volatile region of Afghanistan several years ago, Anne Stark, J.D. ’18, commanded a company that was responsible for the daily operations of a 500-soldier battalion. Charged with all aspects of her soldiers’ welfare, equipping, and training, Stark was so exceptional at her job that she was recognized as one of the top five commanders in the 47-commander brigade, according to the brigade commander.

As pilot of an AH-64 Apache attack helicopter, Stark also flew 150 hours in combat operations in Afghanistan, heading out three or four times a week for eight-hour missions to protect soldiers on the ground. Though she was company commander with significant responsibility, there were never enough pilots to fly missions, so she and every other qualified Apache pilot pitched in.

“The area we were stationed in in Afghanistan was at the time, and still is, very volatile, so there was heavy demand for aviation assets,” said Stark, a graduate of the U.S. Military Academy at West Point and one of the few women in her battalion who can pilot the Apache, which carries missiles, rockets, and reconnaissance equipment. “Insurgents recognize what the Apache looks and sounds like and they very rarely attack a convoy if it’s being protected. I feel being in that role was a real privilege for me.”

While acknowledging the inherent danger of air missions, Stark — who graduated in the top 10 percent of her class in the Army’s Aviation career course — said her greatest concern was protecting soldiers on the ground. “If you ask any Apache pilot, they’d say if they were afraid of one thing, it’s that we wouldn’t do the best we possibly could to support troops, that we didn’t get there quickly enough or deploy our weapons systems quickly enough to save American lives,” she said.

Stark, whose parents both served in the U.S. Marine Corps, grew up in Ohio; at West Point, she majored in physics and earned the highest class rank in all nuclear physics classes as well as in political analysis and physical geography. Named a 2005 Marshall Scholar, she earned a master’s degree in technology policy at the University of Cambridge in the United Kingdom, then a second master’s degree, in Middle Eastern and Central Asian security studies, at the University of St. Andrews, where she played rugby.

During a college summer shadowing an Apache pilot on an Army base in Korea, Stark became fascinated with the helicopter. After graduating St. Andrew’s, she entered the U.S. Army Aviation Center of Excellence in Fort Rucker, Ala., where she met and married a fellow Apache pilot, Capt. Aaron Stark, a 2017 M.B.A. candidate at Harvard Business School. The couple was assigned as platoon leaders at the same Army base in Colorado, then sent to Germany as company commanders. Shortly after arriving, they were deployed to different parts of Afghanistan, Anne Stark to a region near the Pakistan border.

As headquarters commander, she learned that many of her soldiers struggled with serious financial problems. “I realized many of them have exorbitant loans at high interest rates,” said Stark, who became a coordinator for Financial Peace University, a financial literacy course for soldiers and their families. “It outraged me a bit that these less-than-reputable companies were targeting soldiers, and that got me interested in the legal and policy side of the regulation of the financial industry.”

Her final assignment before leaving the army, as chief of relocation operations, involved relocating — from Germany to the United States — her battalion and its operations, including 55 families and $10 million in equipment. Stark then matriculated at HLS, which she chose because of its Veterans Law and Disability Benefits Clinic, which assists military veterans with a range of legal issues. “That attracted me because of what it communicated about the University’s culture and its values,” she said. Veterans “are a population who are underserved.” Although she hasn’t decided what direction her legal career will take, “because of my background, it’s a population I’d be very interested in serving.”