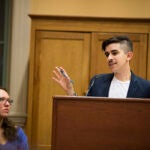 Taking a leaf out of the American Civil Rights Movement’s book, Roma rights activists undertook a legal battle in European courts to challenge the pervasive discrimination that has kept them living on the fringes of society.

Roma right activists filed a complaint in 1999 before the European Court of Human Rights saying that Roma students were 27 times likelier than non-Roma children to be placed in substandard schools. Eight years later, the court found that the Czech government indeed placed a disproportionate number of Roma children in special schools for children with learning disabilities, which was deemed an act of segregation that violated fundamental human rights.

Known as Brown v. Board of Education of Europe, the ruling highlighted the plight of the Roma, who are often denied access to basic rights and face a life of poverty, discrimination, and exclusion. The ruling was momentous.

“It shook the system,” said Adriana Zimova, J.D.’11, a human rights attorney from Slovakia and a Roma rights activist.

“It came at a time when putting Roma children in special schools for children with mental disabilities was accepted as the norm,” she added. “And all of a sudden, the court came and said, ‘Actually, that’s no longer permissible.’”

Zimova spoke last week at Harvard Law School about the challenges of fighting human rights abuses against the Roma. Zimova was accompanied by Margareta Matache, a Roma rights activist.

Matache, who grew up in Romania in the 1980s and now works as an instructor at

“I attended a mixed school with Romanian and Roma children,” said Matache. “My best friend was Romanian, and the teachers wanted us to be together in the same classroom. That’s the only reason why I was placed in a Romanian school.”

There are between 10 to 12 million Roma across Europe, but although they are the continent’s largest minority, they are often invisible and forgotten. The Roma, also called Romani, shun the term Gypsies, which they find derogatory.

Descendants of Indians who settled in Europe about 1,000 years ago, the Roma have suffered discrimination throughout their history. A quarter of their population were persecuted and killed during the Holocaust.

But despite their victory in the court, which helped draw attention to their situation, little has changed. Ninety percent of the Roman live below the poverty line and struggle to have access to good education, housing, and employment. Only 1 percent go to college.

“The ruling led to a greater recognition of the segregation that Roma suffer,” said Zimova. But the legal battle continues for many Roma rights activists, and more efforts to fight prejudice against Roma are necessary, said Zimova and Matache.

The Roma live in segregated neighborhoods, which are surrounded by walls built by non-Romas to keep them separated, said Zimova. Other signs of racism prevail: employment ads with “No Roma Need Apply” signs, and restaurants’ refusal to serve Roma customers.

Incidents of violence against Roma are common. Houses occupied by Roma have been set on fire, and families have been expelled from the communities. Segregation in schools often still continues, said Matache, but the battle for equal access to education for Roma children goes on as well.

“Litigation was not enough because we continue to segregate Romani children in Romania,” she said. “We need a more holistic approach. On one hand, we need to work on the legal case, but we also need to have a strategy that continues after the ruling form the court and keeps working with the communities.”