Religion is changing, fellowship too 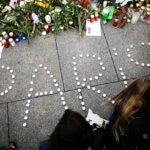 Millennials are creating their own style of community, say authors of ‘How We Gather’

Instead of worshiping in wooden church pews, CrossFit has millennials jumping on top of wooden boxes until exhaustion hits. The workout is not intended to replace church, but to build community.

With millennials leaving religious affiliations at an alarming rate, an increasing number are joining organizations that blend of sense of community, a sense of self-awareness, and a resemblance to religion, according to a study titled “How We Gather,” researched by two students at Harvard Divinity School.

“We are offering a challenge, and this is more of a challenge to the world of religion, that … if you think religion is dying, we are saying religion is changing,” said Casper ter Kuile, co-author of the Harvard study.

Millennials, the generation of 18- to 34-year-olds, are not practicing religion the same way their parents and grandparents did. According to a Pew Research Center study, more than one-third of millennials are not affiliated with a religion, which is double the number of baby boomers who identify as unaffiliated.

Additionally, another Pew study released this week indicated that about one-quarter of American millennials say they attend religious services on a weekly basis, and about half say they believe in God with absolute certainty, compared with seven in 10 Americans in the silent generation (those born in the mid-1920s to 1940s) and the baby boomers (born between 1946 and 1964).

These were trends that Angie Thurston, co-author of “How We Gather,” started to notice before she came to Harvard. Thurston began charting the organizations that millennials are joining to find a deeper sense of community. When she came to the Divinity School she met ter Kuile, who is training to become a minister for nonreligious people. That’s when Thurston’s small spreadsheet turned into a galaxy of more than 100 different institutions and organizations, and the two decided to get to work on their research.

“By the time we had about 100 organizations we thought, ‘OK, maybe we should talk to some of these people,’” Thurston said.

Growing numbers of people are finding meaningful community in places outside of church. Learn how the CEO of CrossFit, Greg Glassman, thinks of his work as church, perhaps even religion.

“All these kinds of key functions that a community can serve.”

At CrossFit — a company with 4 million users —members join a close-knit community of people trying to better themselves through physical fitness. Members have organized fundraisers and other drives to aid friends and CrossFit colleagues going through illnesses or other extraordinary circumstances.

At the Dinner Table, members get together over a homemade meal to discuss personal loss. It is there that the 20- to 30-somethings begin to heal by creating a safe place to talk about feelings and emotions.

For some of the organization leaders, grasping the study and questioning was didn’t take immediately, according to ter Kuile. Several leaders got the spiritual connection right away, while others needed time to think about how their work might possibly mirror religion and deep community building.

Ter Kuile said that CrossFit, which is talked about in and out of its circles as a cult-like way for people to work out, came on board immediately. Greg Glassman, CEO of CrossFit, spoke at Harvard Divinity School earlier this month.

Thurston and ter Kuile’s work is continuing as more and more community-based organizations like the ones they studied come into existence. The next step for the research is to find out if these organizations have a responsibility to play more significant roles in the community as more millennials shift away from religion.

“These things are actually religious. You should treat these institutions as religious options that people find,” said ter Kuile. “That’s a difficult thing to hear if you are a church or for other denominations. At the same time it’s exciting, as well.