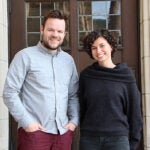 Religion is changing, fellowship too

A new program at Harvard Law School (HLS) aims to help reform the nation’s criminal justice system, with assistance from Harvard students and faculty. The program’s executive director is Larry Schwartztol, who has been a lawyer with the American Civil Liberties Union. Schwartztol has worked on issues including racial justice, policing in schools, educational equality, and economic justice concerns involving the home foreclosure crisis and discriminatory lending practices. When he decided to attend Yale Law School Schwartztol said, “I wanted to find ways to use the law as a vehicle for social justice.”

He recently spoke with the Gazette about the HLS program, his role in it, and a conference sponsored by the new initiative on how the media helps shape the criminal justice narrative.

GAZETTE: What attracted you to this new role as the executive director of Harvard Law School’s Criminal Justice Program of Study, Research & Advocacy?

SCHWARTZTOL: We are in this incredible moment with respect to criminal justice. On one hand, we’re coming from this dark stretch of mass incarceration and decades of incredibly punitive criminal justice policies that have been devastating to people caught up in the criminal justice system, devastating to families and communities, costly, counterproductive. Yet just in the last couple of years we are seeing a real space to question some of the fundamentals about how our country has approached criminal justice and incredible bipartisan awareness that this system we’ve had for the last several decades has not been necessary to keep us safe.

With the recognition of the brutal consequences of this system, and the recognition of the profound racial disparities in the system, there’s an appetite for big thinking about how to change criminal justice and an openness to really remake the way we approach criminal justice. At the same time there’s an understanding that there needs to be good, creative work by lots of people, and some of that creative work needs to come from lawyers. So there’s this amazing opportunity, but no guarantees about the nature or scope of change. Advocates and policymakers have to get it right.

All of that is why I was excited about getting to come into this new role at HLS. The criminal justice program launching this fall is designed to be a policy research and advocacy organization that will be an active and forceful voice in efforts to reform the criminal justice system and to provide an avenue for students here to work in a meaningful way on advancing reform.

GAZETTE: Can you say a little more about the mission of the program and how it is structured?

SCHWARTZTOL: Our mission is to help advance criminal justice reform by bringing rigorous and creative legal thinking to bear on hard, cutting-edge policy problems. The program builds on an incredible infrastructure already at the Law School. I work with the two faculty directors, Carol Steiker and Alex Whiting, and we are excited about bringing together our own mix of backgrounds in doing this type of work. Professor Steiker has a background as a public defender; Professor Whiting has a background as a prosecutor. I come from the public interest advocacy world, so we think about criminal justice differently. We think about policy change differently, and we are really trying to build a program that takes very seriously that diversity of perspectives and approaches.

We are going to be very active on national policy debates and national policy reform efforts. We are going to get students involved in every dimension of that. There’s a yearlong seminar that is the pathway for students into our program. We have 16 excellent second- and third-year students, and the work that they do in that seminar is entirely devoted to the policy initiatives that we are taking on.

GAZETTE: What is the aim of the “New Ledes: The Media & Criminal Justice Reform” conference?

SCHWARTZTOL: We’ve moved from having a conversation about criminal justice where the iconic image is Willie Horton to a conversation about criminal justice that’s driven by images captured by citizen journalists on their iPhones, that’s defined by the president sitting down in a federal prison with a group of inmates to talk about their experiences. We are really interested in exploring how we got to this changed media landscape. Is it because we have a different political climate? Is it because we have different media institutions? Is it because of technology? We will also cast a critical eye on where we are in terms of the media discussions around criminal justice, exploring the blind spots and the stories that aren’t getting told. We wanted our first big public event to be an opportunity to think in a rich and also critical way about those issues. We are structuring a series of conversations on all of these issues, and we see it as something that is going to inform the work we are doing in the policy space.

GAZETTE: Who will be attending the event?

SCHWARTZTOL: We have people who have been leading voices in the way that journalism has developed in approaching criminal justice: Bill Keller, the former executive editor of The New York Times and now chief editor at The Marshall Project; Brent Staples from The New York Times; Jennifer Gonnerman, who wrote the amazing and powerful New Yorker story last year on Kalief Browder, the young man who committed suicide after spending three years in Rikers [Island jail] without being convicted of a crime.

That’s a story that would have been tragic and worth telling and hearing at any moment, but I think what’s really telling is that it has become a frame that is really driving a lot of conversation about the need to have more sensible and humane policies on, for example, bail and solitary confinement. … I think that the power that story has had in driving conversations around reform in New York, and also around the country, is telling.

We are also bringing in people who are in the business of trying to move the conversation around criminal justice. We’ve invited really sophisticated advocates like Nick Turner, president of the Vera Institute, Scott Levy from the Bronx Defenders, Carl Williams from the ACLU. And we are thinking about how technology is changing what we mean when we talk about the media. We have invited people who have spent a long time thinking about and studying and using tools of citizen journalism and social media to try to move the conversation, including DeRay Mckesson, one of the leading voices in the Black Lives Matter movement.

Our hope for the conference is to bring together these different groups of people who are thinking about these issues from different perspectives and really be able to have an illuminating conversation about how the media has changed, how it is continuing to change, and also what that’s going to mean for the criminal justice system going forward.

“New Ledes: The Media & Criminal Justice Reform,” which is open to the public, takes place on Nov. 19 and 20 in Austin Hall at Harvard Law School.