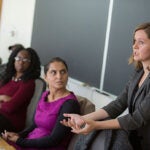 When Lawrence Lessig ended his issue-oriented quest for the Democratic Party’s nomination in the 2016 U.S. presidential election, he vowed to continue his campaign to reform election finance practices and reduce the influence of money in politics.

“The fight is not over,” said Lessig, the Roy L. Furman Professor of Law and Leadership at Harvard Law School, during a conversation with his colleague Jonathan Zittrain about the lessons learned while campaigning for election finance reform.

Before a packed room at Austin Hall on Monday night, Lessig said the issue at stake is the future of American democracy.

“Money has corrupted our political process,” said Lessig. “They [in Congress] focus too much on the tiny slice, 1 percent, who are funding elections. In the current election cycle, 158 families have given half the money to candidates. That’s a banana republic democracy, that’s not an American democracy.”

Members of Congress spend a good deal of their time fund-raising for future campaigns, and the U.S. Supreme Court has removed most of the previous limits on campaign spending.

Lessig said he decided to drop his bid after he was excluded from the Democratic Party’s first debate due to his low poll numbers. He made the announcement with a video released on YouTube early this month.

In a candid conversation with Zittrain, Lessig spoke about his reasons for pushing the election finance issue in the campaign. Zittrain is George Bemis Professor of International Law at Harvard Law School, faculty director of the Berkman Center for Internet & Society, professor of computer science at the Harvard John A. Paulson School of Engineering and Applied Sciences, and a professor at the Harvard Kennedy School.

“What were you thinking?” asked Zittrain.

“You were responsible for this,” quipped Lessig.

Lessig shared his frustration at not having been able to take part in the Democratic Party’s first debate, which, he said, would have allowed him to draw more attention from the public and the media about the need to reform the way political campaigns are funded.

Asked whether he thought about suing the Democratic Party for not allowing him in the debate, he said he received a call from a lawyer suggesting just that.

“I love the law and making justice work, but I wanted to make democracy work,” said Lessig.

He described his candidacy as a referendum on campaign finance reform, but he also focused on the need to reform Congress, which he said is a “broken and corrupted institution” undercut by big money and political gerrymandering. Of these two evils, according to him, the more disturbing has to do with campaign finance because it makes democracy less equal and representative.

Citizens, he said, should embrace the idea of equality to help make democracy work.

“Corruption is the disease, and equality would be the cure,” he said. “We never really included people equally, African-Americans, women, the poor. We ought to embrace the idea of equality inside our political system.”