In praise of John Hope Franklin 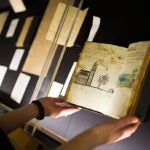 Speaking at Duke, Faust cites scholar’s dedication to the field of African-American history, and to reminding the nation of its troubled past and present

DURHAM, N.C. — John Hope Franklin, a scholar who helped create the field of African-American history, was instrumental both in documenting America’s long and long-ignored legacy of slavery and racism and in reaffirming the continuing importance of that history, Harvard President Drew Faust said during an event Thursday evening commemorating his life and scholarship.

“John Hope Franklin wrote history — discovering neglected and forgotten dimensions of the past, mining archives with creativity and care, building in the course of his career a changed narrative of the American experience and the meaning of race within it,” she said. “But John Hope also meditated about history and its place in the world, on its role as action as well as description, on history itself as causal agent, and on the writing of history as mission as well as profession.”

Franklin was born in 1915 and raised in segregated Oklahoma. Graduating from Fisk University in 1935, he earned a Ph.D. from Harvard University in 1941. Over the course of his career, he held faculty posts at a number of institutions, including Howard University and the University of Chicago, before being appointed in 1983 the James B. Duke Professor of History at Duke University. “From Slavery to Freedom: A History of African-Americans,” published in 1947, is still considered a definitive account of the black experience in America. A lecture series later published as a book, “Racial Equality in America,” became another of his most iconic works. Franklin died in 2009.

An American historian herself, Faust gave the keynote address in the last of a yearlong series of events as part of the John Hope Franklin Centenary, sponsored by Duke University to mark the 100th anniversary of his birth.

Reflecting on both the raging debate about the state of race relations in America after violent incidents in such locations as Ferguson, Mo., as well as on the glimpses of progress that came in their wake — including the removal of the Confederate flag from near the South Carolina capitol — Faust argued that Americans must remember our “shameful legacy” as we take stock of where we stand today.

“And in that effort [Franklin] has also done something more — for history itself — insisting not just upon its relevance,” she said, “but indeed its pre-eminence as the indispensable instrument of change and even salvation from legacies that left unexamined will destroy us. ‘Good history,’ he remarked in 2003, ‘is a good foundation for a better present and future.’ ”

Correcting the historical record was Franklin’s critical contribution to that future, she said.

“For John Hope Franklin, history was a calling and a weapon, a passion and a project,” Faust said. “Fundamental to the task at hand would be to revise the ‘hallowed’ falsehoods, to illustrate how the abuse and misuse of history served to legitimate systems of oppression not just in the past but in the present as well.”

The post-Civil War South had endeavored to “win with the pen what they had failed to win with the sword,” she said, quoting Franklin.

Even the election of Barack Obama as America’s first African-American president during the last months of Franklin’s life was insufficient, in his view, to exorcise the remnants of racism.

“He dared hope that the nation had ‘turn[ed] a significant corner.’ But he knew that erasing the color line required far more than electing a black president. Until we had a new history, we could not build a different and better future,” Faust said. “In other words, it is history that has the capacity to save us.

“ ‘Historians to the rescue!’ ” she proclaimed, quoting Franklin.

Recalling how other nations had confronted difficult pasts — Germany and the Nazis, South Africa and apartheid — Faust argued that America must do the same by infusing the work of historians into public policy and national discourse.

“Only a collective investigation and acknowledgement of past wrongs can exorcise them and liberate a nation and a people for a better future,” she said. “History must move beyond the academy, must become a recognized part of everyday life and understanding for all those who would themselves be free from its weight.”

Faust concluded her remarks by tying Franklin’s revelations about African-American history to the current dialogue about race in America, asking if the nation is now prepared to confront the truth — and the history — of yesterday’s injustices in order to create a better tomorrow.

“If so, it is in no small part because of the kind of history John Hope Franklin dared to write and the ideals he represented as he walked the ‘tightrope’ between engagement and objectivity, as he struggled to unite history with policy and meaningful change, as he sought truths to save us all. Black lives matter. History matters. John Hope Franklin showed us how much they matter to each other,” she concluded.

The three-day symposium, titled “Global Slaveries|Impossible Freedoms: The Intellectual Legacies of John Hope Franklin,” is scheduled to include a series of panels exploring topics that Franklin highlighted during his long career.

Sven Beckert, Laird Bell Professor of History at Harvard, was among the many participating faculty from institutions of higher education across America. The author of, among other works, “Empire of Cotton: A Global History” and, with a group of students, “Harvard and Slavery: Seeking a Forgotten History,” Beckert was scheduled to participate in a panel titled “Slavery, Racism, and Capitalism.”