For law students, a cautionary tale 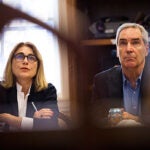 Carrying scales and wearing a blindfold, the image of justice has long symbolized judgment delivered without bias or prejudice.

That was not the case for Victor Rosario.

“The blindfold meant something different for me: that sometimes justice closes her eyes to the truth,” said Rosario, who served 32 years in prison for a crime he said he didn’t commit.

Now 58 years old, Rosario was 24 when he was charged with homicide by arson in a Lowell fire that killed three adults and five children. The charges stuck. Throughout his years in prison he maintained his innocence, but it wasn’t until his team of attorneys found evidence to force a new trial that his verdict was overturned, last year, and he was released on bail.

The Law School hosted Rosario on Nov. 13 for a talk before students titled “Anatomy of a Wrongful Conviction: Why Did Victor Rosario Serve 32 Years in Prison for a Crime He Didn’t Commit?” His lawyers, Lisa Kavanaugh and Andrea Petersen, accompanied him to the event, which was sponsored by the Criminal Justice Program of Study, Research & Advocacy.

Rosario put a human face to the heartbreak of wrongful convictions and called on students to be mindful of stories like his should they become criminal defense lawyers or prosecutors.

“You, students of the law, can help prevent cases like mine from happening,” he said. “You’re the future of justice.”

For Rosario, the wheels of justice are still turning slowly. The prosecution has appealed the judge’s ruling for a retrial, and Rosario can’t talk publicly about the case. But his lawyers spoke at length about how the team was able to gather enough evidence to write a motion for a new trial.

It took years of work, said Petersen, who met Rosario in 2006. She credited the collective effort of the Committee for Public Counsel Services’ Innocence Program, the New England Innocence Project, and the Boston University School of Law’s Wrongful Convictions Clinic.

Rosario’s conviction in 1983 was based on his confession and the testimony of a witness who identified him as standing in front of the burning building. Police said Rosario and two other men threw Molotov cocktails into the building as revenge for a drug deal gone wrong.

After reviewing hundreds of transcripts from the original trial and all the hearings, Rosario’s legal team found new evidence based on advances in arson science and the latest research in false confessions, said Petersen.

First, fire experts concluded that the blaze could have been accidental and that Molotov cocktails couldn’t have caused such a big fire. Second, Rosario’s confession was determined to be coerced because when he signed it, he was in the throes of delirium tremens due to alcohol withdrawal.

For Petersen, Rosario was “standing in the wrong place at the wrong time.” What sealed his fate, she said, was an unfortunate mix of facts: the fire was a high-profile event, the prosecutor was aggressive, and Rosario had a weak defense attorney.

Lisa Kavanaugh HLS ’00, who directs the Innocence Program of the Committee for Public Counsel Services, echoed the sentiment.

“This is a textbook example of how things can go wrong,” she said.

In his talk, Rosario said that language was another factor in his confession. A native of Puerto Rico, he spoke only Spanish at that time.

Rosario learned English in prison and became an ordained minister as well as a serious runner, logging 76 laps a day in the prison yard. With his wife of 22 years, he founded an organization to help inmates keep in contact with their families and to support them post-release.

“Many people who are in prison don’t know what to do with their freedom once they are free,” Rosario said in a follow-up phone conversation.

For his own part, Rosario plans to continue counseling inmates, hosting a religious radio program, and sharing lessons from his incarceration with law students.

“I’d like to inspire students because their decisions can affect people’s lives.”