For HUD, much done, more to do 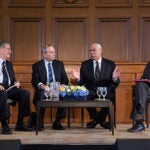 An inside view from Powell, complete with regrets

ATLANTA — In the midst of the 50th anniversary year of the U.S. Department of Housing and Urban Development (HUD), officials from HUD, Harvard University, and elsewhere took time today to reflect on the government agency’s longtime fair-practices efforts in one of the cities where it has had its greatest recent impact: Atlanta.

In that city, the Center for Civil and Human Rights played host to a collection of current and former political leaders, housing officials, and researchers whose work to establish mixed-income housing developments has led to better lives for many residents.

Among those on hand were HUD Secretary Julian Castro, J.D. ’00, and Harvard President Drew Faust, who discussed the holistic approach that is required to break the country’s ongoing cycle of poverty and to battle increasing economic inequality.

Castro said his stewardship of HUD has provided him with a chance to pay forward the opportunities that he and his brother had growing up in San Antonio — where he would later become mayor. He said that his experience has shown him that give-and-take with local leaders is vital to ensuring effective and fair housing policy.

Looking forward, Castro said he hopes that two changes will bolster the department’s efforts to sustain fair practices: increased resources from Congress and an overarching strategy to tackle quality-of-life issues. He said that key concerns include the facts that “40 percent of the people who live in public housing are children” and that roughly 10,000 units of public housing are lost each year.

Faust said she had her own special bond with HUD. Decades ago as a recent college graduate and a participant in the Civil Rights Movement, she got her first job as an intern for the nascent department in its Philadelphia office.

A university like Harvard has a kinship with an organization like HUD, Faust suggested. “Universities are building the framework of opportunity that HUD sees as a goal,” she said, including universities’ efforts to study the myriad issues affecting fairness and the programs that train leaders in fields that can create positive social change.

Faust lamented that conversations on economic challenges often don’t include housing concerns, such as the dramatic rise in the number of Americans for whom housing accounts for half or more of their income.

Castro also would like to see housing policy discussed more often, particularly as an issue in the 2016 presidential election, but he noted that “the challenge is that this is not a glamorous issue.” He suggested that local institutions and constituents press the candidates to understand these concerns.

The opening conversation at the Atlanta session focused on housing efforts within that city. But it quickly became clear that the Southern city had lessons for national leaders as well. Providing effective housing policies involves much more than spurring construction projects, speakers said in a common refrain.

Local real estate developer Egbert Perry supported Glover’s comment, noting that school conditions were one of the primary hurdles in getting financially secure families to return to the city.

But while the Housing and Urban Development Act of 1965 sought to reduce the disparity in housing that resulted in increasingly segregated neighborhoods throughout the country, Perry’s focus was different. He saw the resulting segregation as a result of “the people who had no choice” being left behind.

Former Atlanta Mayor Shirley Franklin credited HUD with being an integral partner in empowering local leaders and activists to break the cycle of substandard housing, but she also cautioned, “As long as areas stay isolated, then the problems won’t be addressed.”

Even providing fairer housing can prove a slippery slope. Georgia Tech economist Thomas Boston wondered if mixed-income initiatives and other housing policies were really having the desired effect. “I was in disbelief,” he said, regarding the discrepancy between “what was stated and what were the outcomes.”

He studied the progression of families over a number of years on the housing front, and found that those who were granted housing vouchers were one and a half times more likely to be employed than those who remained in public housing. For those who received a coveted slot in mixed-income developments, their employment likelihood was four times greater.