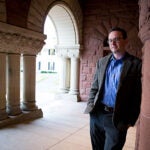 It was with tragic timeliness that Professor Patrick Weil discussed “After the Paris Attacks: What Is the Future for French Society?” on Wednesday at Harvard Law School.

The French sociologist, historian, and legal scholar, who is currently a visiting professor at Yale Law School, had been invited several months ago to speak on the roots and repercussions of the shootings at the offices of the satirical magazine Charlie Hebdo and at a kosher supermarket in Paris in January. After the city was again torn by terrorist violence on Friday, his topic was even more current.

Weil began his lecture, which was co-sponsored by the Human Rights Program, Islamic Legal Studies Program, and Harvard European Law Association, by flashing back to the earlier attack — and the community response. The huge march, by some estimates 4 million, that coalesced in the days following the shooting demonstrated unity in the face of tragedy. But not everyone felt included, and Weil noted dismissive comments from members of both the Jewish and Muslim communities, some of whom felt marginalized and isolated by the show of supposed national solidarity.

That reaction, he went on to say, offers both an explanation and a possible response to the question of how France — and by extension, the world — can move forward after yet another round of terrorism.

“Some French think, ‘I don’t recognize my country,’” said Weil. “And some feel, ‘I am French on paper, but I am not recognized as such.’” In such fragmentation, he said, are the roots of discontent and violence.

But how to promote a sense of le vivre ensemble — living together — that will help disparate communities feel engaged as what Weil called “part of a common society”? The answer, he said, lies in understanding history. He said many communities of contemporary France need to hear their stories incorporated into the national narrative.

Modern France, Weil said, is built on four principles: equality under the law; the memory of the French Revolution, and thus the idea that people can change the law; a shared language and culture; and the concept of läicité, which roughly translates as the separation of church and state. But what unites the country — any country — is a sense of history: a shared story.

Weil described how a French man from Marseilles could travel to Dunkirk and still know he is in France.

“Why does he feel at home?” Weil asked. “The language. He can communicate with the people in the café and the restaurant. He can talk about politics. Why doesn’t he feel at home when he meets somebody who he might think is coming from Algeria? He has never been told the role of Algeria … in French history.”

For Weil, a crucial part of this history is his country’s extensive colonization, particularly of North Africa. Calling the 130-year involvement in Algeria France’s “collective trauma,” Weil said, “Algeria is central because it was a racist colonization. Whatever point you take it, we come back to Algeria.”

From the original inhabitants of the colony who were mistreated and impoverished, to the Algerian soldiers who sided with the French and were then abandoned, to the French settlers — the pied noir — who felt equally abandoned by their country, the history of Algeria is an unhappy one. Weil said that history also fed anti-Semitism among Muslims who compared their treatment with that afforded Jewish refugees, specifically after World War II.

In order to move on, the scholar said, there must be more open discussion about these events. For France to get beyond its racism and the backlash of hate, he said, conflicts and injustices of the past must be more fully understood.

History is “a progress of values, of principles,” he pointed out. “We went from slavery to abolishing slavery. We went from colonization to decolonization.”

He also made a case for gaining a sense of history through the personal: “People have to find themselves through their parents and their grandparents, and through the country in which they live.”

Only by accepting the many facets of its citizens’ diverse experiences, Weil said, will France be able to come together as a multicultural country, respectful of each of its four principles. But that, he stressed, can happen.

“What I remember after January, in the days following, we felt — I felt — the need to call people,” Weil said, noting how he reached out to friends and students, including devout Muslims.

“We needed to talk, to check that we were on the same path — that we were still friends,” he said. “We were able to talk about the situation as friends and compatriots. Across all the country, we had people meeting in their homes. I can see that happening again. People need to talk, and that’s a sign of a strong of a strong citizenry that wants to continue.”