Five from Harvard are Rhodes Scholars 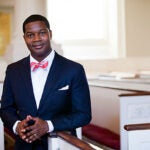 Seeing through others’ eyes

Five Harvard undergraduates were among the 32 Americans chosen as Rhodes Scholars on Saturday. They will begin their studies at the University of Oxford next October.

Rhodes scholarships are among the most prestigious academic awards for college students and grads, attracting interest from hundreds of top students every year. The 2015 American Rhodes Scholars faced competition from 869 students nominated by 316 colleges and universities nationwide. This year’s awards bring the ranks of Harvard’s Rhodes Scholars to 355.

Established in 1902 by the will of British philanthropist Cecil Rhodes, the scholarships cover all costs for two or three years of study at Oxford. Winners are selected on the basis of high academic achievement, personal integrity, and leadership potential, among other attributes.