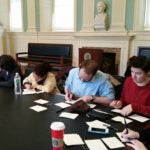 A moment for gratitude

Their goals are deep and complex.

The ways in which Islamic legal theory accommodates change. The effort to forge a universal agreement on human rights. Reforming criminal law to incorporate the findings of neurobiology and philosophy. The question of how the brain gives rise to the mind. The shared intellectual heritage of medieval Islamic and Christian theologians.

Their interests are diverse, but one thing Neil Alacha, Grace Huckins, Rivka Hyland, Garrett Lam, and Hassaan Shahawy share is a desire to leave a lasting, positive impact on the world.

Their first steps will begin next year, when the five members of Harvard’s Class of 2016 begin their studies as Rhodes Scholars at the University of Oxford.

They are among the 32 Americans named as Rhodes recipients on Saturday. Arguably the most prestigious academic awards in the world, the scholarships cover the full cost of two or three years’ study. With this year’s winners, Harvard has now produced a total of 355 Rhodes Scholars.

Here’s who they are and how they’ll spend their time:

Despite having had several days to get used to his new identity as a Rhodes Scholar, Quincy House senior Neil Alacha still felt as though he was dreaming.

“I keep replaying the moment in my head, and it still feels like a blur,” said Alacha, a social studies concentrator. “It was a great, great moment, and all the support I’ve received from family and friends has been amazing.”

At Oxford, Alacha plans to explore the notion that human rights should be afforded to everyone, regardless of background or religion.

“The fundamental idea is that there are aspects of humanity that connect all of us, no matter where we are from and no matter what we believe,” he said. “If that’s the case, then it shouldn’t matter what our religion is, or what we say our faith is. But right now, that’s not how the world is. I think there can be a path forward where we can say it doesn’t matter if you’re Christian, Jewish, Muslim, or atheist, you’re still owed certain rights that the government must protect.”

As part of that commitment, Alacha has worked with the International Gay and Lesbian Human Rights Commission to document problems in Iran, Iraq, and other parts of the Middle East, and has served with the Phillips Brooks House Association while at Harvard.

In part spurred by his Syrian heritage, Alacha hopes to focus on Islamic human rights in an effort to shed light on the ways in which Muslims and members of other faiths share basic fairness beliefs.

“Especially with what’s going on in the world now … for a lot of people Islam is simply a black box,” he said. “It will be very challenging, but also exciting, to be able to say these are the things that someone who is deeply committed to the Islamic faith shares with someone who is deeply committed to another faith, or to someone who doesn’t have a religion. When we talk about a universal declaration of human rights, we need to be able to do that.”

The neurobiology and physics concentrator hopes to build models that mimic the ways in which the brain works in an effort to understand everything from mental illness to philosophical questions about where the mind comes from.

“It’s actually explaining life,” Huckins said of understanding the brain. “What we identify as life is, psychologically, much less our capacity to breathe, but our mind.”

At Oxford, Huckins plans to continue those studies at Oxford’s Centre for Theoretical Neuroscience and Artificial Intelligence, where researchers are working to construct neural models.

“I think the brain is the greatest question that is currently extant in science, and it’s one that is rapidly travelling toward being solved,” she said. “I hope it’s solved in my lifetime, and I want to contribute to that solution.”

Finding those answers, she said, will offer important insight into a host of issues, ranging from the medical to the technological and beyond.

“I think it’s a very socially important question,” she said. “In order to better treat mental health, for example, we need to understand the brain on a physical level, and that’s something we can’t do yet. There are also practical implications in terms of artificial intelligence and other domains. But on the philosophical level, consciousness is not a new problem — it’s fascinated people for millennia.”

If researchers are able to “solve” the brain, Huckins said, the implications will be far-reaching.

“It will have a profound impact on how we view the world, philosophically,” she said. “Suddenly, the one entity that seems beyond the physical — the mind — is no longer intangible.”

While it may be politically expedient to claim that an intellectual gulf exists between the Judeo-Christian and Islamic worlds, scholars such as Rivka Hyland are working to show otherwise.

A Lowell House resident and concentrator in Near Eastern languages and civilizations, Hyland hopes to spend her time at Oxford illuminating the ways in which early Muslim and Christian scholars drew upon similar, or in some cases identical, texts to interpret scripture.

“We have a very good understanding of how medieval Christians and Jews either borrowed from each other intellectually, or used similar sources,” she said. “As a result of that shared intellectual heritage, we are much more comfortable with the idea of a Judeo-Christian canon of thinkers and culture in Europe. But we don’t have a good account of the Islamic and Christian interaction, and my work is in fleshing that out.”

Going forward, Hyland said, forging that understanding will soon be all the more important.
“We are entering a time where we will see a lot of integration between Muslims and Christians due to the refugee crisis in Europe,” she said. “In the midst of these debates about how open borders should be, what the responsibility of various European countries should be, and what the influx of people means for these countries economically and culturally, this Judeo-Christian rhetoric shows up a great deal.”

By developing a similar shared intellectual heritage between the Islamic and Christian worlds, Hyland believes it may be possible to create a world where Christians, Jews, and Muslims draw on their shared philosophy to live in peace.

“If we had a similar understanding of the parallels that do exist between Christianity and Islam, it may be easier … to base mutual understanding on the language of culture and philosophy.”

“The past 48 hours have been a whirlwind,” Lowell House resident Garrett Lam said of receiving a Rhodes. “Mine was the second name read, and it was really disbelief [that I felt].”

Though ostensibly a neurobiology concentrator, Lam has already been accepted to Harvard Law School, and hopes in the future to reform the legal world to incorporate the findings of both science and philosophy to create a more just system.

“You don’t usually see a bridge between neurobiology and the law, and it seemed to me that there were many that just aren’t there, so I’d like to be building them,” he said. “What I’m really interested in are questions about human decision-making … and it seemed to me that if you focused on the empirical understanding of how our brains work, we would not have set up the criminal justice system the way it is.”

Among the areas he cited was the way in which the legal system punishes offenders.

“One of the main tenets of the system is this idea of retribution,” he said. “That’s one type of punishment that’s very backward-looking: Someone did something wrong, they made someone suffer, so we will make them suffer. But if you understand the way the brain works, that doesn’t work.”

At Oxford, Lam hopes to study at the Uehiro Centre for Practical Ethics and the Centre for Neuroethics and to bring that knowledge to bear on his eventual legal career.

While he’s been overwhelmed to have received a Rhodes, Mather House resident Hassaan Shahawy said he’s also been preoccupied with questions of how to make the most of the next two years.

“What has quickly set in is a sense of responsibility,” he said. “This is such an amazing opportunity, and it’s not the end of my academic career, but the beginning of an entirely new set of opportunities to do good work in this world.”

At Oxford, the concentrator in Near Eastern languages and civilizations and history hopes to devote his attention to developing an understanding of the ways in which Islam has changed as it adapted to new cultures.

“I grew up Muslim in America in a post-9/11 world, so I was automatically confronted with questions that I had to be able to address,” he explained. “I love my faith, and I love the Muslim communities in America, and how diverse they are.

“I’m really motivated to explore Islamic studies so I can bring that knowledge back and create healthy, vibrant, educational communities, and help navigate these tensions so people can be confident with their faith and their identity,” he added. “One of my hopes is that that by helping people become more secure in their identities, we can detract from the violent extremism that occurs around the world.”

One way to do that, he said, is by helping people, whether Muslim or not, understand the ways in which Islam has changed over the centuries.

“In studying the rise of political Islam, so much of what people associate with Islam today — harsh punishments, strict interpretations — that’s not something that was present in the Islamic tradition for many years,” he said. “It’s actually a very new phenomenon that depends on the very specific economic and political conditions that have arisen in the 20th century. By using the traditional authority to combat those movements, and show that traditional Islam is really a flexible way of life that incorporates many cultures and many peoples into its framework, is, I think, one of the best ways to move forward in the 21st century.”