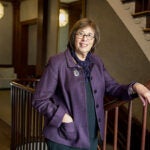 Before Nov. 20, European reaction to the massive flight of refugees from civil war in Syria was often described as polarized — on one side, an inclusive attitude focused on dividends through an influx of hard-working people; on the other, xenophobia centered on unemployment and security.

“That was the state of play,” said Jacqueline Bhabha, a professor of the practice of health and human rights at the Harvard T.H. Chan School of Public Health, during a discussion Tuesday on the refugee crisis, sponsored by the Mahindra Humanities Center.

But the attack in Paris that left 129 dead has significantly altered views here and in Europe on how the world should respond to the millions of refugees who have fled violence in their homeland, Bhabha noted. She and Michael Ignatieff, the Edward R. Murrow Professor of Practice at the Kennedy School, spoke on the refugee issue as part of News Flash, a humanities forum focused current events.

In the wake of the Paris assault, increased hostility to refugees “is going to make the journey to safety even more flawed that it already is,” Bhabha said.

In the United States, at least 25 governors, including Charlie Baker of Massachusetts, have said they will refuse to accept any Syrian refugees. Whether governors are legally able to implement such an order is doubtful. “But of course the political posturing delivers dividends,” Bhabha said. Two Republican candidates for president have said that only Christian Syrian refugees or none at all should be accepted by the United States.

This is a “geostrategic disaster” that plays right into the hands of the Islamic State, or ISIS, said Ignatieff.

Gesturing at an image showing the states planning to reject Syrian refugees, he said, “Imagine the strategic signal that this is sending to important allies in the wake of the terrorism attack … It simply says the world’s most powerful country is too frightened to take Syrians. It’s a message of fear.”

Moreover, ISIS has a vested interest in stemming the tide of refugees to support its vision, he said. “When people flee en masse from the caliphate, it’s not so good for the caliphate.”

Both Bhabha and Ignatieff attempted to put U.S. reluctance to accept refugees in context, noting that Turkey has taken in 2 million refugees and there are large numbers in Jordan and Lebanon.

“Those who have fled, paradoxically, are the lucky ones,” Bhabha said. The more vulnerable group is the displaced population within Syria, now convulsed with violence and experiencing outbreaks of cholera and polio.

Ignatieff acknowledged the importance of strong security measures to weed out potential sleeper cells and other dangerous elements. However, he said, of the 780,000 refugees admitted to the United States since the Sept. 11 attacks, only three have been indicted for terrorism offenses.

“I don’t think you can have an honest, generous, open-hearted refugee policy unless you have very tough control of migration,” he said.

James Simpson, the Donald P. and Katherine B. Loker Professor of English, cautioned against the “dangers of rhetoric” that dismisses all those who oppose accepting refugees as merely xenophobic or racist. Many people are “not-unreasonably anxious” and concerned, he said.

“Where we can counter fear with facts, we should do so,” he said.