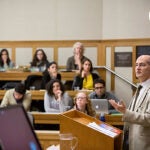 When Linda Greenhouse praised a politician at a fundraising dinner in the spring of 2008, she was still a New York Times reporter covering the Supreme Court.

“He was the finest public servant I had ever known,” she said of New York’s former governor Hugh Carey, in a tale she recounted Tuesday evening at the William E. Massey, Sr., Lectures in American Studies.

Greenhouse had covered Carey’s campaign and his first three years in office in the mid-1970s, when she was just beginning her prestigious 40-year career at the Times.

But that night, she said, she was there as a citizen not as a journalist. Still, she knew she had crossed a line.

As she delivered the first of three Massey Lectures Tuesday, Greenhouse spoke candidly about the “ambiguous and shifting boundary” that separates journalism from citizenship and why she has crossed that line more than once.

Greenhouse recalled that at a speech she gave at Harvard in 2006, she stirred controversy when she criticized the Bush administration for having “turned its energy and attention away from upholding the rule of law and toward creating law-free zones at Guantanamo Bay, Abu Ghraib, Haditha, and other places around the world.”

In the speech she gave as the recipient of the Radcliffe Medal, Greenhouse complained about the “sustained assault on women’s reproductive freedom and the hijacking of public policy by religious fundamentalism,” and went on, “to say that these last years have been dispiriting is an understatement.” In the uproar that ensued, Greenhouse recalled, she was criticized for expressing her “personal views” while being a working journalist.

There are two schools of thought about journalists and their political views, with one camp arguing that journalists should refrain from publicly voicing them to avoid the appearance of partiality. The other camp contends that journalists are citizens and entitled to their personal views as long as they don’t come in and influence their work.

A Pulitzer Prize winner in 1998 for “her consistently illuminating coverage of the United States Supreme Court,” Greenhouse stands with those who believe that journalists don’t need to appear “neutered” and are entitled to be citizens.

In 1989, Greenhouse took part as “a citizen” in an abortion-rights rally in Washington, an event she described as “an early experience of accidental activism” and “an early encounter with journalism ethics under outside pressure.” When she was criticized for having attended the march and told by a colleague that she should have taken off covering the abortion issue, Greenhouse recalled saying briskly, “That’s your opinion.”

A trailblazer, Greenhouse was the first woman the Times sent to Albany to cover state government in the early ’70s, and she has fiercely defended her rights to express her political views in her private life. To the criticism that followed her Radcliffe speech, she responded saying, “Let the chips fall where they may.”

A Radcliffe College graduate in 1968, Greenhouse became a journalist drawn by a “desire to write about politics and politicians.” She has written three books. The latest one, “The Burger Court and the Rise of the Judicial Right,” with Michael J. Graetz, will be published next year.

The Knight Distinguished Journalist in Residence and Joseph Goldstein Lecturer in Law at Yale Law School, Greenhouse covered the Supreme Court for The New York Times between 1978 and 2008. She writes a bi-weekly op-ed column on law.

Asked about the differences between working as a reporter and a columnist, Greenhouse, a former Harvard Overseer, said she found it liberating but as much work as before.

“My opinion is my opinion, but I try to back it up with facts,” she said. “You’re entitled to your opinion but not to your own facts.”

Linda Greenhouse’s lectures: “Just a Journalist: Reflections on Journalism, Life, and the Spaces Between, “ are sponsored by Harvard’s Graduate Program in American Studies, and the William E. Massey, Sr. Lectures in American Studies. The last lecture takes place Thursday, Nov. 19, from 5:30 to 6:30 p.m. in the Sackler Lecture Hall at 485 Broadway, Cambridge.