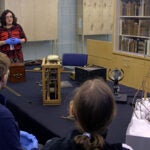 Scholars in African-American history draw parallels with past movements

As a protest against violence toward African-Americans, Black Lives Matter burst onto the national scene just two years ago. But according to Harvard scholars, it is a movement that has historical roots that go back more than 300 years.

“In the history of African-Americans, the story of struggle has been a constant one,” she told an overflowing crowd Tuesday at Robinson Hall Lower Library.

Sponsored by the Harvard History Department, the seminar “#BlackLivesMatter in Historical Perspective” underscored the growing movement for racial justice taking hold across the country.

On Monday, the president of the University of Missouri resigned in the wake of student protests against racial tensions.

The movement was born in 2013 after a Florida jury acquitted George Zimmerman of second-degree murder in the shooting death of African-American teenager Trayvon Martin.

Higginbotham drew parallels between earlier protest movements and Black Lives Matter, which describes itself as a chapter-based national organization working against police violence and anti-black racism.

She compared Black Lives Matter to the anti-lynching campaign of the late 19th and early 20th centuries, led by Ida B. Wells and the National Association for the Advancement of Colored People (NAACP), which was founded in 1909. The campaign brought international attention to “extrajudicial killings of black people” in the United States, Higginbotham said.

“The NAACP understood that you didn’t have to look a certain way to be lynched,” she added, “because they lived daily with the fear of not only violence but with the fear of constant segregation.”

Walter Johnson, Winthrop Professor of History and a professor of African and African American studies, spoke about St. Louis’ history of segregated neighborhoods.

“St. Louis, Missouri, is to this day one of the most racially segregated cities in the United States,” said Johnson. “What happened in Ferguson is that the history of structural racism was expressed in the systemic racism of the Ferguson police department.”

Black Lives Matter also bears similarities to the Black Power movement of the 1960s and ’70s, said Brandon Terry, an assistant professor of African and African American Studies and social studies. That movement, he said, also supported black self-determination and aimed to galvanize the public into action.

Terry said Black Lives Matter represents a unique moment in the history of black political thought because it rejects the idea of “black uplift,” which proposes that educated blacks are responsible for the well-being of the black population.

“Black Lives Matter folks don’t get dragged into that argument,” said Terry. “They think that’s not what they’re supposed to do and that it’s kind of crazy to think that a group of activists are supposed to solve this centuries-long problem.”

In shedding light on African-American life from the beginning of slavery to the anti-lynching crusade to the Civil Rights Movement, the speakers shared their hope that history can provide clues for Black Lives Matter to achieve its stated goal of changing a “world where black lives are systematically and intentionally targeted for demise.”

“History is crucial,” said Elizabeth Hinton, an assistant professor of history and of African and African American Studies. “It helps us figure out ways in which we can move forward and transcend the institutions and systems that have made black lives not matter for the entire history of this nation.”