Smith project gets OK from Board of Zoning Appeal 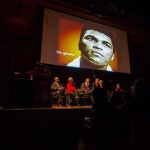 A panoply of achievement

Work on campus center makeover set to begin in spring

The Cambridge Board of Zoning Appeal (BZA) gave its approval to Harvard University’s Richard A. and Susan F. Smith Campus Center renovation plans Thursday night. The project had previously secured the approval of the Cambridge Historical Commission, the Harvard Square Advisory Committee, and the Cambridge Planning Board.

The approval, the final of the significant regulatory permits governing the proposed design, means that the project will move forward and, pending building permits and coordination with the city on construction logistics, work can begin as scheduled in the spring.

Designs include a transparent pavilion facing Massachusetts Avenue, which will provide a welcoming and vibrant entrance alongside a redesigned exterior plaza.

The lower levels of the building will include multifloor spaces for formal and informal gatherings, with food venues, flexible meeting and collaborative spaces, and landscaped courts. The second floor also will include the undergraduate and the graduate council offices with meeting space. The 10th floor will offer additional common and social spaces with views of the Charles River, Harvard Yard, and sections of campus beyond the river.

A majority of the building will remain open during construction and many University tenants will remain in place throughout. 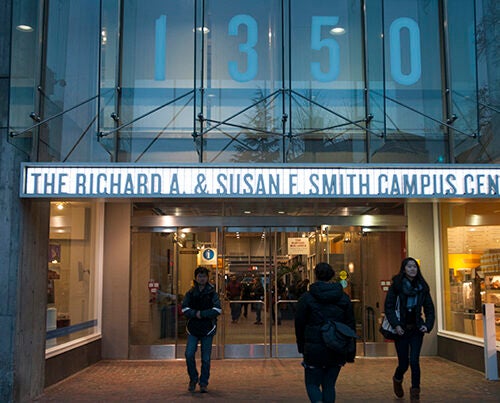 Smith Campus Center, formerly Holyoke, to be transformed for 2018 opening

The Smith Center will continue to house a number of administrative offices, including Harvard University Health Services, Harvard University Housing, HUID services, parking services, and the Harvard Information Center. The Graduate School of Arts and Sciences, Faculty of Arts and Sciences Registrar’s Office, and ticketing office will also be located in the building, making them more accessible to the entire campus community.

The building, which will continue to welcome the greater Cambridge community and the wider public, will provide an improved experience for residents and visitors alike.

Plans include twice as many permanent, regulation-size chess tables, half of which will now be indoors so they can be used year-round. There will be additional public restrooms, modernized bicycle parking, more seating indoors and outdoors, and improved overall circulation. There will be plenty of options for food, various year-round performances, and an abundance of natural light. And the entire area will finally be accessible to individuals with disabilities.

“This project represents a mutually beneficial result for Harvard, Harvard Square, and the city of Cambridge. We appreciate the thoughtful process of the city’s regulatory boards and the input of all who participated in the comprehensive dialogue that led to the design and program associated with this exciting project,” said Meredith Weenick, vice president for campus services. “The new Smith Campus Center will be a central meeting point ― from Cambridge to Allston to Longwood, and for undergraduates, graduate students, faculty, and staff. It will complement our current House system and only enhance the important social, educational, and cultural relationships and bonds that are so central to life at Harvard.”

Students, faculty, and staff were engaged throughout the planning process. Community input was also garnered through public meetings in Harvard Square, including one in late September. Harvard planners conducted more than 25 focus groups and received nearly 6,000 responses to a campuswide survey.

Harvard has also prioritized sustainability in the project and is using an integrated approach for design and construction, with a goal of creating a space that visually and symbolically represents Harvard’s commitment to sustainability.

Formerly known as the Holyoke Center, the building was renamed in 2014 in honor of Richard A. and Susan F. Smith, who donated the funds for its renovation.  The redesigned center is expected to provide a major boost to the University’s multiyear effort — through the Common Spaces Program — to create and improve locations that foster the intellectual, cultural, and social campus experience for the entire Harvard community and beyond.

Plans call for the completed center to open in 2018.