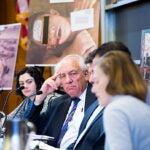 Torture through a viewfinder

University presidents, college deans, architects, academic administrators, and students came at the invitation of Harvard President Drew Faust to learn, to consider, and to share ideas about “Building the Research University of the 21st Century.”

The conference grew out of a conversation at the first meeting of the Harvard Allston Steering Committee nearly two years ago. Faust noted in her remarks that the group had been discussing how to think about the campus of the future when Harvard Law School Dean Martha Minow said, “Let’s have a conference about that.”

The focus of the two-day meeting (Oct. 22-23) was not on the research conducted in academic settings, though the breadth of that research had an impact on the discussion. Rather, the sessions of the conference that drew more than 220 participants to what is now the Knafel Center at the Radcliffe Institute, and what was the Radcliffe Gymnasium at what was Radcliffe College, were focused on the physical shape campuses may take in an age of long-distance learning in a digital world.

Speaking to those attending the opening session and dinner, Faust highlighted the transformation of the Radcliffe Gym, noting that the building was designed by the architectural firm of McKim, Mead, and White at the turn of the last century, and that it once included ropes on which the young women of Radcliffe practiced evacuating their dorms in case of fire. Today, it “serves a far different use in response to Harvard’s changing needs,” Faust said.

University leaders and those advising them, she said, now need to focus on “how fast things are changing and how that is going to affect our future” since universities are challenged these days to be both affordable and accessible. How, she asked, does that change “the way we shape our campuses?”

Speakers at the various sessions, from Richard C. Levin, former Yale University president, to Hilary Ballon, vice chancellor of NYU’s Abu Dhabi offshoot, addressed everything from the history of campus design to the nitty-gritty of dealing with community representatives during the building process. But Harvard’s development of its 358 acres in Allston was never far from the minds of the School’s participants.

“We’re all keenly aware that whatever we do in Allston has everything to do with what Harvard will look like in 50, 100, 150 years,” said Harvard Provost Alan Garber of the planning of the Allston campus, which may someday be larger than the Cambridge campus.

David J. Skorton, secretary of the Smithsonian Institution and previously president of Cornell University, said there are “three things that will dictate the shape of the campuses of the future”: the current emphasis on STEM (science, technology, engineering, and math) education, the future of online education, and competency-based education.

There is still an important place, Skorton said, for the liberal arts, taught in residential college settings, with direct faculty-student and student-student interactions, echoing a point Faust has repeatedly made.

Many speakers stressed that whatever the future of the university campus will be, getting to it and ensuring its educational, financial, and administrative success will depend on institutions having a vision and “a decision-maker,” someone who, after listening to input from myriad constituencies, will make the hard choices necessary to move massive, complicated projects forward.

Those two points were the particular focus of Levin, who noted that he had “had the opportunity to build three campuses, one local, one global, and one virtual.” The local campus, in West Haven, Conn., was made up of 1.6 million square feet of laboratories, administrative offices, factories, and warehouses sold to Yale by Bayer Pharmaceuticals. The global campus was a college created in Singapore by Yale and the government of Singapore. The virtual campus was the online education venture Coursera, of which Levin is CEO.

Levin said that the principal lessons he has taken from those experiences are that “you have to have a vision, it doesn’t matter how you collect it, but somebody has to enunciate [and say] here’s a vision …You shouldn’t hire an architect until you know what you want,” and, finally, “there has to be a single decision-maker … we delegate too much to committees.”

In summing up the conference, Garber spoke of the changes over time in the vision of Harvard in Allston. “When we think about space, we have to think very hard about who is the community” will be using it and about “what is our relationship to the surrounding community,” he said.

“The most important question is how we think about the community and [our] place in it.”